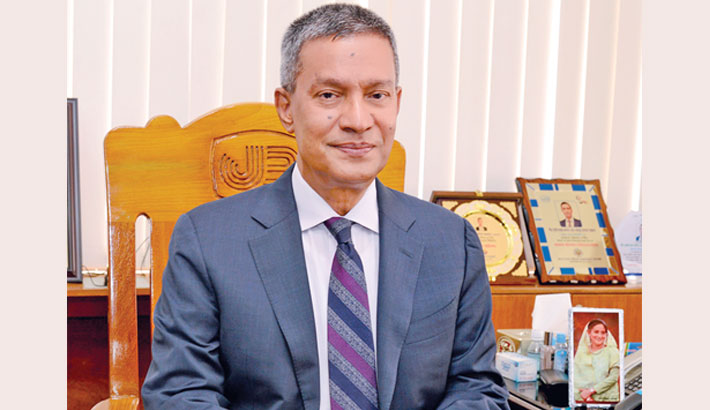 Under the Bangladesh Banks (Nationalization) Order 1972, 12 private banks were reconstructed and merged into six nationalized banks. Former United Bank Limited and Union Bank Limited were merged into Janata Bank. It is mentionable that Father of the Nation Bangabandhu Sheikh Mujibur Rahman himself named this bank with pure Bangla word “Janata”.

This year Bangladesh is observing Golden Jubilee of its independence. With the passage of time, Bangladesh is now recognized as the Role Model of economic development under the leadership of Honorable Prime Minister Sheikh Hasina, the quite competent and very worthy daughter of Bangabandhu, the Father of the Nation. A developed Bangladesh was actually the dream of Bangabandhu and his daughter is on the way to fulfil it. By this time, the country’s size of GDP, per capita income and the size of national budget have now become 48 times, 22 times and 723 times higher than they were in 1972 respectively. Moreover, the number of banks and bank branches increased 10 times than it had been before.

Janata Bank got corporatized as Public Limited Company in 2007. As the second largest state-owned commercial bank, it has successfully participated in implementing all sorts of development policies adopted by the government as a committed partner.

For overall trade expansion and to create employment opportunities, Janata Bank has already invested Tk. 60,000 crore among 4.5 lakh borrowers both in public and private sectors including the NGOs. The main export-oriented sectors of Janata Bank Limited are RMG, textile and leather industries. Moreover, the bank has invested in various sectors like agriculture, power and gas, ship breaking, ship building, trade services, different manufacturing industries, infrastructure development, SME, CMSME and others.

The current government is committed to make “Digital Bangladesh”. As part of it, Janata Bank is the first to respond in digitalization of banking services. It has already implemented CBS in all modules, Bangladesh Automated Clearing House (BACH), Real Time Gross Settlement (RTGS) and Bangladesh Electronic Fund Transfer Network (BEFTN). A pilot project “Easy JANATA” is going on under the guidelines of a2i program of the Prime Minister’s Office.

To boost foreign remittance earning, Janata Bank Ltd. has 4 overseas branches in UAE, 2 exchange houses - one in USA and another in Italy having two branches in Rome and Milan, Taka Drawing Arrangement and Correspondent Relationship with world famous exchange companies, agencies and banks. Janata Bank has adopted all advanced digital payment systems for the beneficiaries like Speedy Foreign Remittance Payment System, Instant Cash payment system, Spot Cash, Web-based and others. Janata Bank has extended loan facilities against all types of Wage Earner’s Bond. 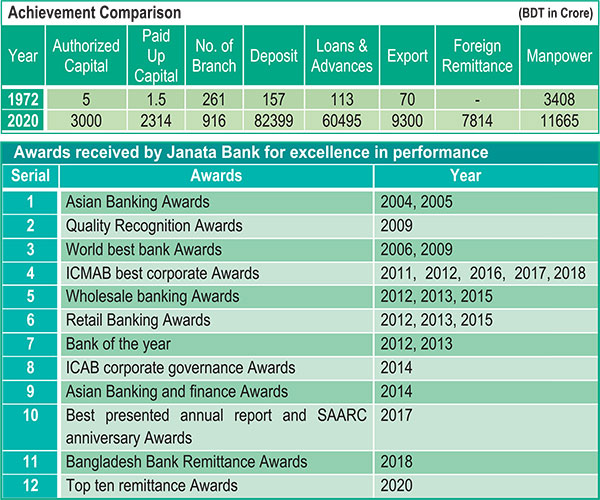 After a commendable performance in achieving MDGs, Bangladesh is now working for SDGs. The SDG1 and SDG2 mean No Poverty and Zero Hunger respectively. As part of achieving these two goals, Prime Minister Sheikh Hasina undertook several social safety net programs. Janata Bank Limited is one of the leading banks to implement this program. Janata Bank has disbursed Tk. 86 crore among 5.75 lakh people as old-age allowance, around Tk 44 crore among 1.99 lakh persons as allowance for disabled and about Tk 33 crore among 2.20 lakh widows as widow allowance.

The current government’s another mentionable mission is to introduce National Integrity Strategy (NIS) to make a corruption-free Bangladesh. NIS is a key driver to get rid of corruption beyond the system of prosecution. Janata Bank Limited is seriously launching NIS as per guidelines of the Bangladesh Bank.

Under the guidelines of financial inclusion of the current government, Janata Bank Limited has ensured all kinds of banking services to the lower income group. For this purpose, Janata Bank has already opened about 2 lakh farmers’ accounts.

Activities during Covid-19 Situation and its Stimulus Packages Disbursement

From the beginning of Covid-19 pandemic, the bank has been ensuring its smooth services according to the direction of the FID and Central Bank as a front fighter. Among all other banks, Janata Bank was first to respond to disburse the “Stimulus Packages” provided by the Govt. during the pandemic. Even in lockdown, as essential financial service provider, top management and executives of the bank registered full attendance, neither a branch nor a controlling office was closed, and all the meetings of BOD and other committees of the bank were held as per regular schedules.

We are implementing several CSR programs since 2010 that include:

l               Blankets distribution among the cold-affected, distressed people across the country