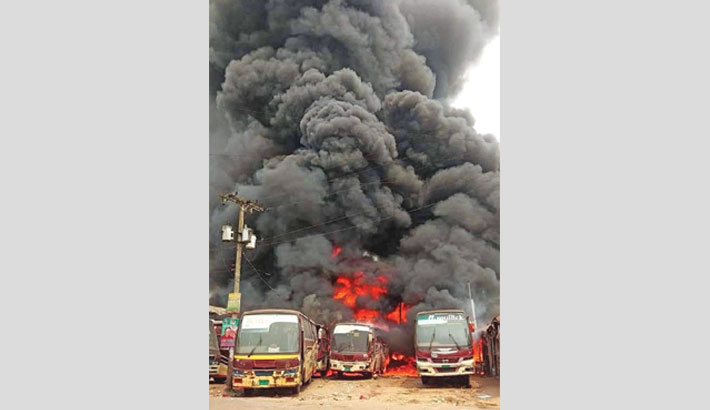 A massive column of thick, black smoke billows from burning buses after a devastating fire broke out at Bandura Bus Stand in Nawabganj on Wednesday, burning down at least nine buses and 14 shops. —SUN photo

At least nine buses and 14 shops were gutted in a fire that broke out at Bandura Bus Stand in Nawabganj, on the outskirts of the capital, on Wednesday.

On information, five units of firefighters rushed to the spot and doused the blaze. No casualty was reported in the incident.

Sources said unscrupulous people set the buses on the fire following a feud over the ownership of the bus stand’s land.

Abdul Haque, station officer of Dohar Fire Station, told the Daily Sun that the fire broke out there around 10:27am.

Being informed, two firefighter units of Dohar, one of Keraniganj, one of Sreenagar and one of the capital reached the spot and doused the fire around 2:05pm.

He said that 15 buses were parked at the bus stand; of them, nine got burned while the rest six could be removed to a safe place. Besides, 14 shops, adjacent to the bus stoppage, got also gutted, he said.

On the cause of the fire, Abdul Haque said they could not know the reason of the fire immediately.  Sources said all the buses are owned by N Mallic Paribahan.

Debashis Bardhan, deputy director (Dhaka Division) of Fire Service and Civil Defence, told the Daily Sun that they will form an investigation committee to know the exact cause of the fire and total loss.