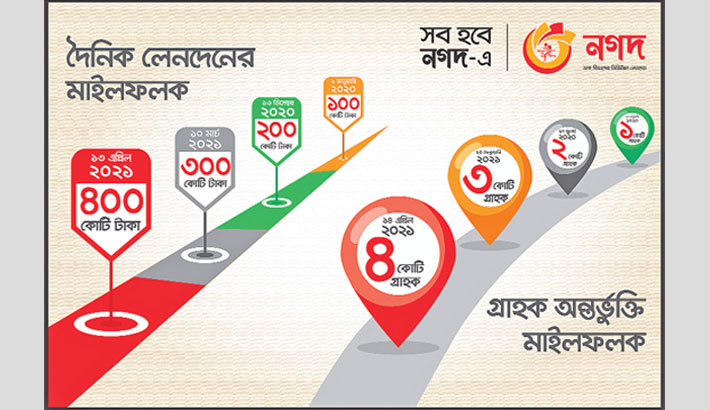 The digital financial service of the Bangladesh Postal Department has earned kudos by digitalizing the disbursement of various government allowances, stipends and financial assistance during the coronavirus pandemic, said a Nagad press release.

Digitalisation has made it easy to deliver the benefit to the beneficiaries, ensured transparency, and saved the government money, it added.

Anyone can be connected to Nagad any time by simply dialing *167# from any mobile phone, which also facilitates the account opening process.

The fastest account-opening system was rolled out in partnership with mobile phone operators, which is the first of its kind globally.

Nagad has been growing as expected from the very beginning, the company said. It crossed Tk1 billion mark in January 2020.

At one of the events after launching, SajeebWazed Joy, information and communication technology adviser to the Prime Minister, set a target of Tk 2 billion in daily transaction volume within next one year.

Posts and Telecommunications Minister Mustafa Jabbar described the rapid advancement of Nagad as a successful combination of technological innovation and the introduction of customer-friendly services.

Tanvir A Mishuk, managing director and co-founder of Nagad, said, “We are working with the slogan of ‘Everything possible with Nagad’ to make all traditional services available on Nagad.”

Nagad’slowest cash-out charge of Tk 9.99 per thousandwithin Bangladesh has helped to achieve popularity in the sector.

There are currently 12,000 merchants and 500 e-commerce platforms using Nagad’s network.