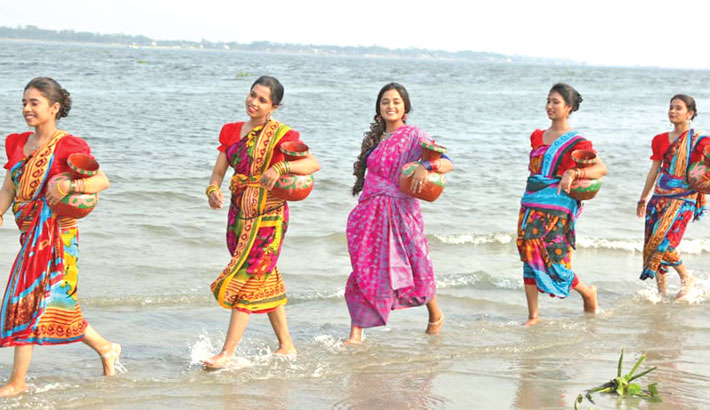 A scene from ‘Taan’

Badiul Alam Khokon is a renowned film director of the country. He has directed 33 films in his career. Among them 30 films are commercially successful and his film ‘Agun’ starring Shakib Khan is waiting for its release date.

Now, the talented director is coming up with a musical film titled ‘Taan’. Khonon has made the film based on a song on the same title.

Poet Ashim Shaha has written the lyrics of the song while Murad Noor has composed the track.   Singer Sabbir Nasir has lent his voice to the song.

The shooting of the film took place at different locations at Sonargaon upazila of Narayanganj.   Models Ashik Chowdhury, Shakila Parvin and others will be seen in the film.

About the film, Badiul Alam Khokon said, “It is my first musical film as a director. In honour of Murad Noor and Sabbir Nasir, I have directed the film. The story and locations were amazing. The entire unit has worked hard to make a good film. I hope the audience will like my first musical film.

Singer Sabbir Nasir said, “Last year, I lent my voice to a song titled ‘Tomare Dia Dilam’ composed by Murad Noor. I have received huge response for the song. I hope the song ‘Taan’ will also be appreciated by the audience.”

“It was very challenging for me to lend my voice to eminent poet Ashim Shaha’s lyrics. I’m very grateful to poet Ashim Shaha and Badiul Alam Khokon bhai for the musical film”, Sabbir added.

The musical film will be released on the YouTube channel of Sabbir Nasir soon.