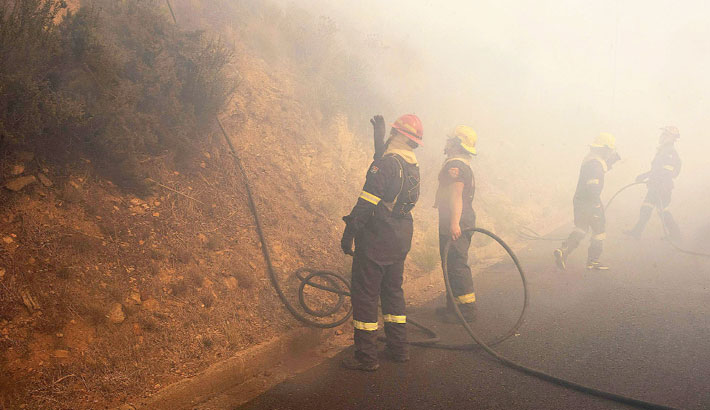 Fire-fighting teams work to keep the fire from crossing Philip Kgosana Drive, one of the main arterial roads into the city centre, threatening the suburb of Walmer Estate, after a forest fire burns out of control on the foothills of Table Mountain in Cape Town Monday. —AFP PHOTO

CAPE TOWN: Residents are being evacuated from Cape Town neighborhoods on Monday as a wildfire spreading on the slopes of the city’s famed Table Mountain was fanned by strong winds overnight and houses came under threat, reports AP.

City authorities said residents of parts of the Vredehoek suburb were being evacuated as a “precautionary” measure after the blaze spread toward the area. Devil’s Peak, one of the iconic points of the mountain, was lit up in the early hours of the morning by the flames, which had now spread to the front side of the mountain and toward residential areas.

A man in his 30s had been arrested on suspicion of arson, a city official said, although it’s not clear if he was responsible for starting the blaze, which began early Sunday. The man was arrested Sunday night after witnesses reported seeing three people moving through flames on the mountain slopes setting more fires, Cape Town safety and security official JP Smith told The Associated Press.

More than 250 city and volunteer firefighters have been deployed to battle the fire that has already damaged parts of the University of Cape Town, including the library, a historic windmill, and a restaurant near a memorial for Cecil Rhodes.

Helicopters with water containers suspended on ropes are scooping up water from swimming pools and the nearby ocean and dumping it on the fire.

Wildfires on the mountains surrounding Cape Town are fairly common during the hot, dry summer months but are sometimes fanned into huge, uncontrollable blazes by strong winds.

Gift of the Givers, a disaster response organization, said it was providing meals for around 4,000 students who were evacuated from the university campus. Many of those students were taken to local hotels, Gift of the Givers said.

The charity is also supplying food and water for firefighters who have been working for more than 24 hours to try to control the fire.

No injuries to residents or students have been reported but at least one firefighter was hospitalized for burn injuries, the city said.

Heavy smoke hung over parts of Cape Town and people were advised to cover their faces with wet towels or rags while being evacuated.

On Sunday, the fire badly damaged the University of Cape Town’s Jagger Library, where important archives and book collections were kept. Cape Town mayor Dan Plato said some valuable works were lost but many were saved by roller doors that were activated to seal off parts of the library.

“It is tragic that literary treasures have been lost at the UCT library but I have been informed that some of the most valuable works were saved,” Plato said.