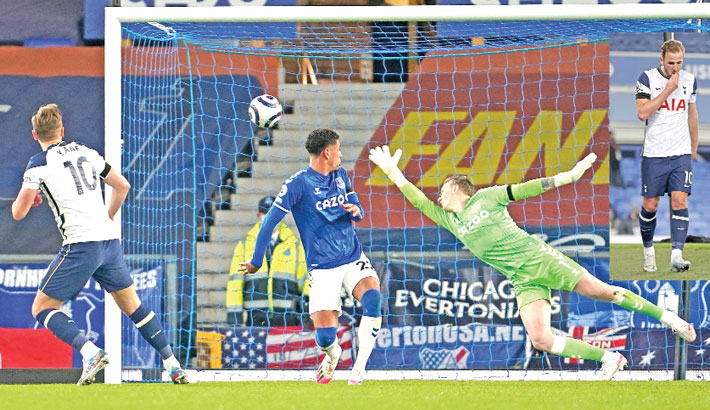 England forward Harry Kane suffered a worrying ankle injury ahead of next week's League Cup final after scoring twice in Tottenham Hotspur's 2-2 draw away to Everton in the Premier League on Friday.

Gylfi Sigurdsson also grabbed two goals for Everton in a result that did little for either side's European hopes.

Kane, expected to lead England's attack in this year's coronavirus delayed European Championships, went off in stoppage time towards the end of the match after rolling his ankle when challenged in the box at an Everton corner.

"It is too early to say something," Tottenham manager Jose Mourinho told Sky Sports when asked afterwards about Kane's injury.

Kane's 20th league goal of the season put Spurs ahead in the 27th minute at Goodison Park only for Sigurdsson to equalise soon afterwards from the penalty spot.

It was the reverse story in the second half, Sigurdsson getting his second in the 62nd minute before Kane levelled six minutes later.

Everton were left a place and one point further back than Tottenham, but do have a game in hand on Mourinho's side.