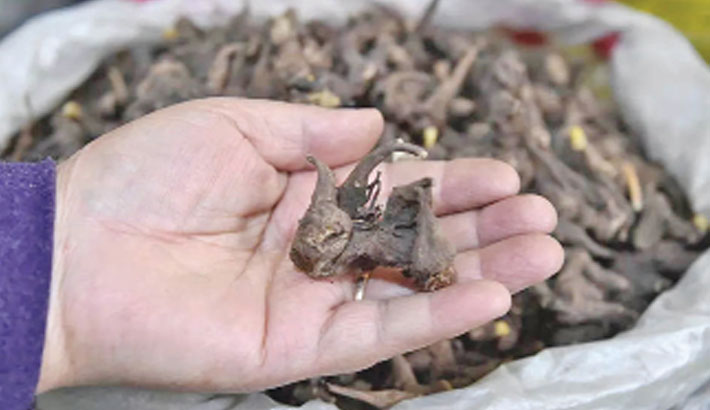 BISHKEK: Kyrgyzstan is promoting a poisonous root as a safe treatment against the coronavirus as the country battles a new wave of infections despite health warnings.

The health ministry unveiled the remedy at a news conference on Friday, claiming the impoverished country’s leader has used the herb to cure “thousands” of sick inmates when he served jail time last year, reports AFP.

Health Minister Alimkadyr Beishenaliyev took sips of the solution that contains extracts of aconite root in front of journalists as he talked up its healing properties.

“There is no harm to health,” Beishenaliyev said after gulping the potion.

“You need to drink it hot, and in two or three days the positive PCR test result disappears and the person immediately becomes better.”

Aconite root is used in traditional medicine even though it is considered highly toxic.

The authorities have said that a third wave of Covid-19 cases is beginning in the Central Asian country of 6.5 million people, which suffered a difficult summer as the virus overwhelmed hospitals last year.

Ahead of the presentation, President Sadyr Japarov took to Facebook late Thursday, releasing a video that appeared to show the remedy being bottled by a team of men who were not wearing protective equipment.

The label on the bottles called the drink effective “against coronavirus and cancer of the stomach” but warned that drinking the solution without heating it up might result in death.

The World Health Organization on Thursday criticised the decision to promote the remedy.

“A drug that has not undergone clinical trials cannot be registered and recommended for widespread use by the population,” the WHO said.

Beishenaliyev claimed Japarov had successfully treated “thousands of prisoners” using the solution prior to being released from jail by protesters and catapulted to power during a political crisis last year.

Japarov is not the first leader to claim a herbal cure for the coronavirus.

In Turkmenistan, another Central Asian country, leader Gurbanguly Berdymukhamedov hailed licorice root as a cure for the coronavirus, a disease he insists has yet to touch his isolated country of six million people.

Madagascar’s President Andry Rajoelina has promoted a locally-brewed infusion, based on the anti-malarial plant artemisia, to fight the virus.