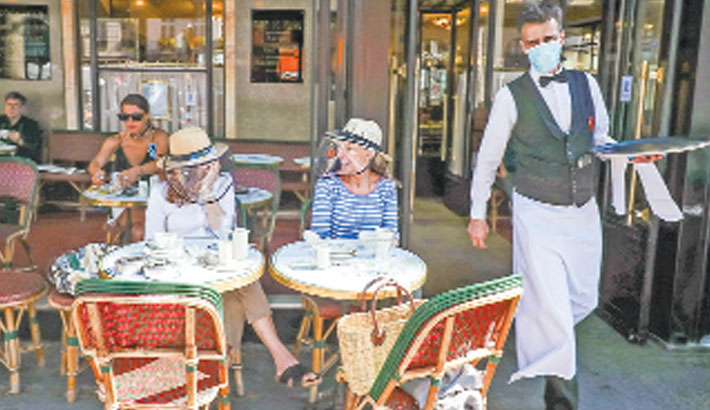 Paris police said on Saturday they had fined over 100 diners at an underground restaurant flouting coronavirus restrictions and arrested its organiser, after a week of allegations that ministers attended similar rule-breaking events, reports AFP.

Officers were “called out for an excessive noise complaint about a restaurant” late Friday and “put an end to a gathering of over 110 people,” the French capital’s police posted on Twitter. “Guests fined for failing to respect applicable health measures. Organiser and manager arrested,” they added.

The prosecutor’s office said the two were released Saturday as the investigation continues.

In a second incident in Saint-Ouen, just outside Paris, police fined 62 people at lunchtime on Friday, news channel BFMTV reported.

Police tweeted that they had arrested the manager of that restaurant as well.

Underground restaurants offering wealthy people a pre-coronavirus dining experience have made headlines in France throughout this week.

The M6 private television channel last week broadcast a story based on footage recorded with a hidden camera purportedly from a clandestine restaurant in a high-end area of Paris where neither the staff nor the diners were wearing masks.

Participants were shown enjoying caviar and champagne at the event costing 220 euros(260 dollars) per person.

All restaurants and cafes have been closed in France for eating in for the last five months. The country this week began a new limited nationwide lockdown to deal with surging Covid-19 infections.

One of the organisers of the dinner shown by M6, businessman and collector Pierre-Jean Chalencon, was briefly detained for questioning by police Friday alongside chef Christophe Leroy.

Chalencon had claimed to have held several dinners at his luxury Palais Vivienne venue in central Paris attended by ministers.

“At this stage of the investigation, there is no evidence that indicates any members of the government took part in the dinners being investigated,” prosecutors said after interviewing him.

The former interior minister Brice Hortefeux told AFP he did attend a “professional lunch” with a journalist late last month that was organised by Leroy.

But he said he was informed it was completely legal because it was in a private and isolated apartment rather than in a restaurant.

“We were less than six, no rule was broken,” Hortefeux said, adding “it was very disturbing” to be linked with the illegal dinners for which Leroy is facing legal questions.