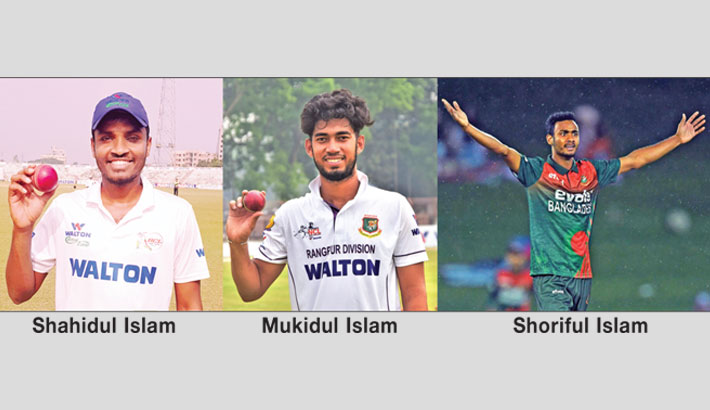 BCB had to make a last-minute adjustment as they won’t be provided with any net bowler by Sri Lanka Cricket during their three-week tour in Sri Lanka, starting on April 12.

It also marked the return of wicketkeeper-batsman Nurul Hasan, all-rounder Shuvagata Hom and pacer Khaled Ahmed after a long gap.

“We have formed an extended squad as we will not have net bowlers while we will also play an intra-squad practice match,” said BCB Chief Selector Minhajul Abedin.

“We will announce the Test squad after the practice game and the cricketers failing to make a spot in the Test squad will return back home in due time,” he added.

The visitors will take on Sri Lanka in the first Test on April 21-25 while the second Test is slated from April 29 to May 3 both at Pallekele International Cricket Stadium in Kandy.

Mustafizur was already given NOC to play in the Indian Premier League, started on Friday while Shakib Al Hasan, who was part of the first Test playing XI against West Indies, opted out of the Sri Lanka series to make him available for the IPL.

Minhajul, however, said that the rookie pace trio has impressed him with their recent performance, especially in the recent National Cricket League matches.

“They (Shoriful, Mukidul and Shohidul) have been in our HP set up and have impressed in whichever version they have played in. Mukidul and Shohidul in particular, have caught the eye in domestic first-class this season and are future Test prospects. They all have age on their side and are talented,” said the chief selector.

Meanwhile, the inclusion of Nurul (played the last Test in 2018) and Shuvagata (last played a Test in 2016) was nothing but full of surprise.

“It’s true that they were not part of our Test squad in the recent past but they were very much on our radar,” said Minhajul.

“Shuvagata is coming back after a while but he has been a consistent performer in first-class cricket. We have considered him as a batting all-rounder but his off-break is pretty handy also and gives us an option in the spin department,” he added.

Bangladesh preliminary Test team members continued their optional training session on Friday at the Sher-e-Bangla National Stadium where Test skipper Mominul Haque and experienced batsman Mushfiqur Rahim were present while other members like Tamim Iqbal opted not to attend it.

The Test series, which is also the part of ICC Test Championship, originally was scheduled to be played in July last year but was postponed due to the Covid-19 pandemic.

Another attempt was made to hold the series in October- November but could not materialise as the tourists were not ready to complete 14-day quarantine.

This time, the Bangladesh contingent will have to complete three-day room quarantine in the island nation while they can start practice from April 15.