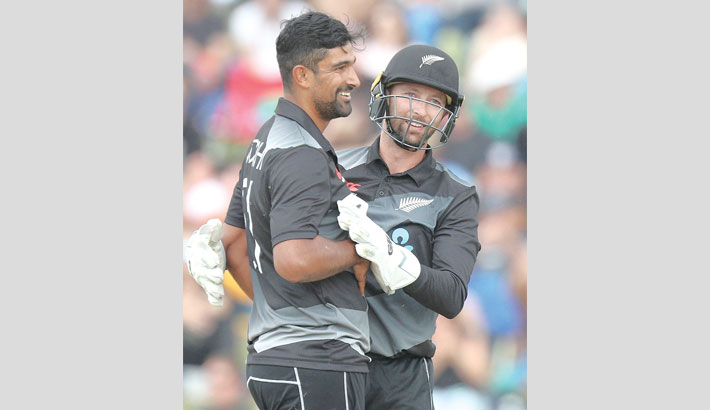 Bangladesh demonstrated yet another woeful performance in their New Zealand tour as they lost the first Twenty20 international by 66 runs against the hosts at Seddon Park, Hamilton on Sunday.

In-form Devon Conway made unbeaten 92 runs while debutant Will Young made 53 runs as the hosts scored 210-3 in their stipulated overs after opting to bat first.

Ish Sodhi’s leg-spin was too much to handle for Bangladesh batters as he claimed a career-best 4-28 that restricted the visitors to 144-8 and went 1-0 up in the three-match series.

“I think we had a chance, in the field; in the first few overs we took a couple of wickets, their runs were under seven runs per over, but the way Devon (Conway) has batted, I think he has been prolific in his batting,” Bangladesh skipper Mahmudullah said after the match.

“He has been very consistent in his last few innings. But we had our chances, as I had said, in the boundary, but it went for six. I think the bowlers bowled really well, we can't really blame them,” he added.

Conway’s rollicking innings included 11 fours and three sixes but his innings could have been cut short if another debutant Shoriful Islam managed to keep his feet inside the ground while holding his catch at square leg on 47.

Shoriful caught Conway on the boundary but it was given six after replays showed that he touched the boundary cushions while completing the catch.

New Zealand batters simply outplayed Bangladesh bowlers as they made 101 runs in the last seven overs to set a mammoth target for the Tigers.

Bangladesh, who were without Tamim Iqbal, Shakib Al Hasan, Mushfiqur Rahim for the first time in an international game after 2006, were reduced to 59-6 in the eighth over of their innings.

Afif Hossain made 45 runs while Mohammad Saifuddin scored 34 not out but it only reduced the margin of defeat as they suffered their 30th consecutive international defeat against New Zealand in their own backyard.

“I think it was a very good chance for players like Naim Sheikh (27 off 18), Afif (Hossain) and the two debutants today show the world how good they are but we need to put a step up as we won't get a squad filled with experienced players and we need to deal with that,” said Mahmudullah.

“So someone (new member) needs to raise his hands up (and contribute). They are very talented and capable to win matches for Bangladesh,” he added.

The second T20I will take place on Tuesday at McLean Park, Napier.