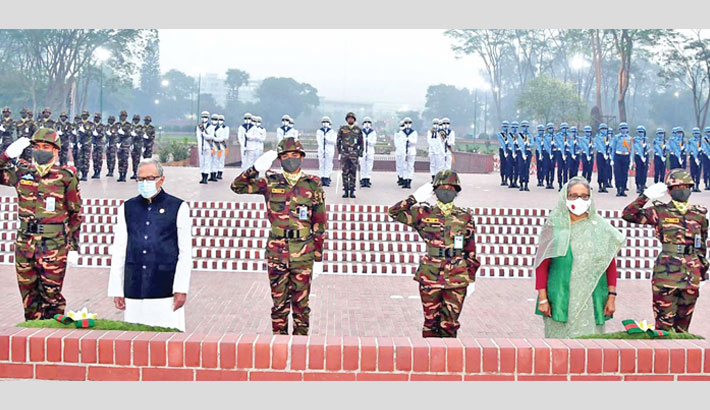 President Md Abdul Hamid and Prime Minister Sheikh Hasina stand in solemn silence after placing wreaths at the National Memorial in Savar on Friday to pay tribute to the martyrs of the Liberation War in 1971 on the occasion of the Golden Jubilee of the country’s Independence and National Day. PID photo

President Abdul Hamid on Friday urged the people to carry out their respective duties with honesty, integrity and sincerity to make independence meaningful and disseminate its benefits among the mass people.

He said the country achieved its independence under the leadership of Bangabandhu after a Liberation War lasting nine months and costing many lives, reports UNB.

“Therefore, we have to carry out our respective duties with honesty, integrity and sincerity in order to make our independence meaningful and disseminate the benefits of independence among mass people. In imparting our duties in personal, family, social, political and state related affairs, we need to behave very responsibly,” he said.

President Hamid made the remarks while addressing the final day of 10-day special programme ‘Mujib Chirantan’ as chief guest marking 50 years of independence and the birth centenary of Father of the Nation Bangabandhu Sheikh Mujibur Rahman at the National Parade Square.

Prime Minister of India Narendra Modi attended the celebrations in the afternoon as special guest.

The President said the development of the country and people are not the sole responsibility of the political leadership. Rather, as citizens of an independent country, it is the duty and responsibility of all.

Mentioning independence as the right of the people, the President said the true meaning of freedom can only be achieved if it is used properly without limiting it within the accomplishment of rights. Again, the beauty of freedom diminishes with its inappropriate use. Liberation and arbitrariness cannot be treated in the same manner.

Terming India as the closest neighbour and a trusted friend of Bangladesh, President Hamid recalled with deep appreciation the unstinting moral and material support that the political leaders and people of India extended to Bangladesh during our Liberation War.

upon Bangabandhu posthumously in recognition of his outstanding contributions towards social, economic and political transformation through non-violent and other Gandhian methods.

The President hoped that the visit of the Prime Minister of India will further strengthen the friendly relations between the two countries.

Celebration of the Birth Centenary is an admirable initiative to know and realise Bangabandhu. The President said: “In place of the ceremonial components of the celebration, we need to put emphasis on educating our new and future generations about the life, work, principles and ideals of Bangabandhu. Initiatives need to be taken so that we can represent Bangabandhu in the international arena in different languages.”

Hamid also called upon researchers, historians and politicians to play pioneering role in this regard.

He shared his direct observation how India had supported and co-operated with us during our glorious War of Independence. At least 10 million people from then East Pakistan (now Bangladesh) took shelter in India. At that time, the government and people of India provided shelter to our 10 million people, arranged their food, provided training to the freedom fighters, supplied weapons, conducted diplomatic efforts to obtain the support of the outside world in favour of our fight for independence, and also a number of Indian soldiers sacrificed their lives as members of the allied force.

This is a unique example in the history of empathy and humanity, Hamid said.

‘Friendship to all, malice to none’- following the policy of Bangabandhu, Bangladesh is successfully advancing in the diplomatic arena by developing bilateral and multilateral relations. The land boundary agreement with India has already been implemented and the maritime boundary dispute has been resolved peacefully.

Prime Minister Hasina received Modi at the VVIP tarmac of Hazrat Shahjalal International Airport (HSIA) upon his arrival by a special flight in the morning.

The Indian Prime Minister was received by 19 gun salutes and given the guard of honour.

He visited the National Martyrs Memorial at Savar and Bangabandhu Memorial Museum at Dhanmondi in the city to pay tributes to Liberation War martyrs and Father of the Nation Bangabandhu.