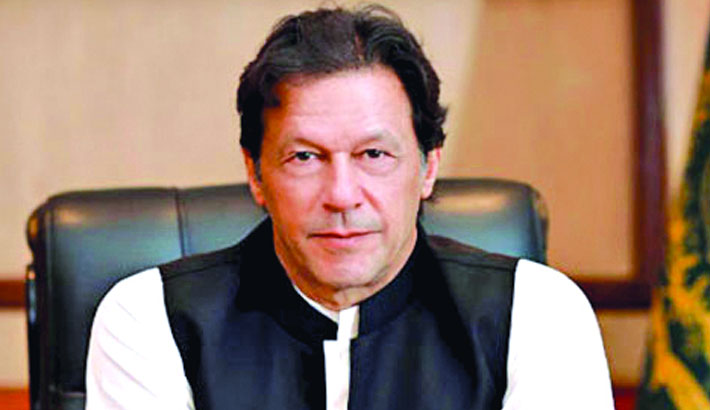 Pakistan Prime Minister Imran Khan on Friday extended felicitations to Bangladesh on the 50th anniversary of the country’s independence, saying Pakistan would like to fortify its existing bonds with Bangladesh, reports BSS.

new ones for our succeeding generations, as we believe the destinies of our two peoples are intertwined,” he said in a written message to Prime Minister Sheikh Hasina.

The message read out by Charge d’ Affairs of Pakistan High Commission in Dhaka Kashif Jameel was screened at the concluding ceremony of the 10-day special programme at the national parade ground here marking the birth centenary of Father of the Nation Bangabandhu Sheikh Mujibur Rahman and the golden jubilee of the country’s independence.

President M Abdul Hamid address the function as the chief guest while Indian Prime Minister Narendra Modi address it as the guest of honor with Prime Minister Sheikh Hasina in the chair.

Imran said the centenary events to commemorate Bangladesh’s Father of the Nation Bangabandhu Sheikh Mujibur Rahman are reflective of the deep affection and esteem.

Noting that Pakistan deeply values its fraternal ties with Bangladesh, which are based on shared history, common faith and convergent interests in promoting lasting peace and security as well as sustainable prosperity in our region and beyond, he said, “On this occasion, let us renew our resolve to jointly work for better future for our peoples and even closer ties between our two countries”.

Inviting his Bangladesh counterpart to visit Pakistan, Imran said, “To take our deepening relationship forward, I also extend a cordial invitation to Your Excellency to visit Pakistan at the earliest convenience. I am confident that this would open a new chapter in our fraternal relations”.

He conveyed his best wishes to Prime Minister Sheikh Hasina and wished her long life, health and happiness and the continued peace, progress and prosperity of the brotherly Bangladeshi people.