Bangladesh now on highway of dev 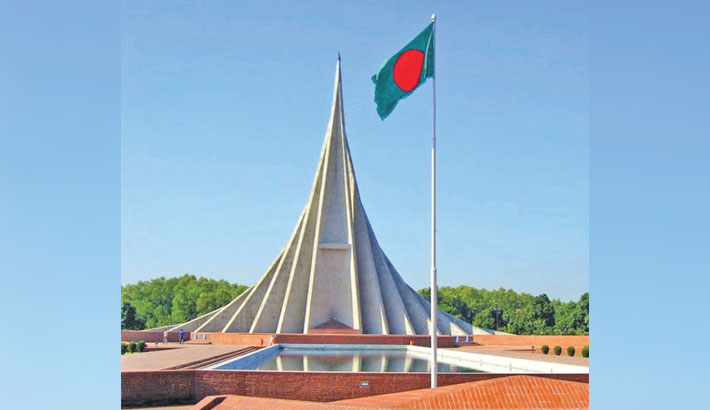 Today is the golden jubilee of Bangladesh’s independence, which was achieved through supreme sacrifices of three million people and chastity of two lakh women.

A 10-day celebration of the golden jubilee coupled with the birth centenary of Father of the Nation Bangabandhu Sheikh Mujibur Rahman that began on March 17 ends today.

The day is being celebrated with a cherished desire to turn the country into a prosperous, developed and a peaceful abode in South Asia.

A new dimension has been added to this year’s celebrations as Bangladesh has got the final recommendation from the United Nations to graduate to a developing country from the group of least developed countries.

Bangladesh is now on the highway of development and a role model of economic progress in the world.

The world leaders have also acknowledged Bangla-desh as an emerging economic powerhouse in South Asia as it has been marching forward to become a prosperous and developed country.

Commemorating the proclamation of Bangladesh’s independence from the clutches of Pakistan, the day is being celebrated with a pledge to materialise the dream of the Father of the Nation to build a ‘Sonar Bangla’.

In the early hours of March 26, 1971, Bangabandhu proclaimed the independence following the heinous attack on unarmed Bangalees by Pakistan forces on the midnight of March 25. The war broke out on March 26 when Pakistan military launched operations against Bangalee civilians, students, intelligentsia and armed personnel. Bangalees on this day took up arms to free their beloved motherland from the clutches of Pakistan following the declaration of the country’s independence.

Bangladesh achieved the independence after a nine-month bloody war against Pakistan through supreme sacrifices of three million people and chastity of two lakh women.

On the eve of the day, President Abdul Hamid and Prime Minister Sheikh Hasina issued separate messages, extending heartfelt greetings and warm felicitations to the people living at home and abroad.

In his message, the President said in order to achieve the desired goal of independence, people-oriented and sustainable development, good governance, social justice, transparency and accountability will have to be ensured. The Jatiya Sangsad will have to be turned into the centre of hopes and aspirations of the people, he said, adding that the ruling party as well as the opposition should play a constructive role in this regard in the House.

“On the eve of ‘Mujib Barsho’ and the golden jubilee of our independence, with the joint efforts of all, may our beloved motherland become a developed country free from hunger and poverty,” the President said.

In her message, the Prime Minister said the Father of the Nation formally proclaimed the independence of Bangladesh in the first hour of March 26, 1971. “Bangabandhu’s proclamation was spread all over the country through telegrams, tele-printers and EPR wireless,” she said, adding that the international media also had circulated Bangabandhu’s proclamation of independence.

She called for taking a vow to build Golden Bangladesh, which will be free from hunger, poverty and illiteracy, imbued with the spirit of the Great War of Liberation. The day heralds with a 50-gun salute at the dawn.

Different political parties as well as socio-cultural and professional organisations have chalked out programmes on a limited scale to avoid public gatherings due to the coronavirus outbreak.

The national flag has been hoisted atop all government, semi-government and private buildings on the occasion.

Public buildings and places have been illuminated and decorated with bunting and festoons.