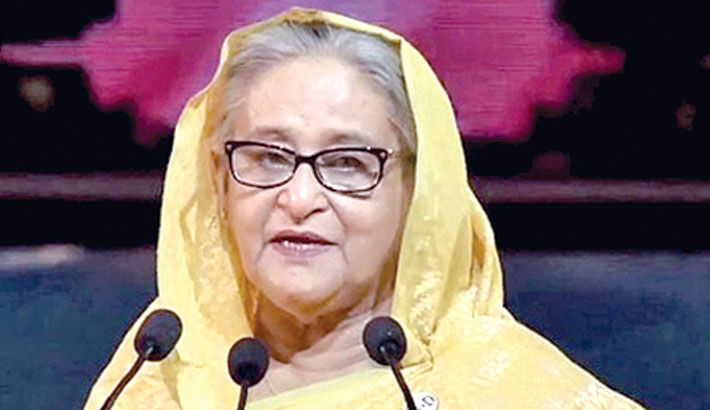 Prime Minister Sheikh Hasina on Wednesday called upon South Asian leaders and policymakers to work unitedly for building a peaceful and prosperous region.

“It’s my heartiest request to all leaders and policymakers to work unitedly to build a peaceful and prosperous South Asia,” she said while delivering her speech, marking the 10-day special celebration programmes of the golden jubilee of Bangladesh’s independence and the birth centenary of Father of the Nation Bangabandhu Sheikh Mujibur Rahman at the National Parade Ground in Dhaka.

Bhutanese Prime Minister Dr Lotay Tshering joined the event as the guest of honour on the 8th day of the grand celebration programmes.

Sheikh Hasina, also president of the ruling Awami League, firmly said they have been working relentlessly to build a hunger-poverty-free non-communal ‘Sonar Bangla’, dreamt by the Father of the Nation.

“Bangladesh has already received the final recommendation to graduate from the least developed country status to a developing country. Bangladesh will be a higher middle-income country by 2031 and a developed and prosperous one by 2041. We are working to achieve the goal,” she said.

Mentioning that about one-fourth of the world’s population live in South Asia, Sheikh Hasina said there are lots of potential in this region along with problems.

“We’ve unparalleled energy, innovation capacity and the ability to survive despite natural calamities. We can easily improve the fate of the South Asian people by utilising the resources through mutual cooperation,” the premier mentioned. “If we work together for the betterment of our people, South Asia will surely become one of the most prosperous regions in the world,” she added.

Recalling Bhutan’s contributions to Bangladesh’s War of Liberation, the Sheikh Hasina said Bhutan was the first country who recognised Bangladesh as an independent nation.

“It was a red letter day for us when we first heard on the radio that Bhutan recognised us as an independent state. We always acknowledged Bhutan’s contribution,” she said.

Recalling that Bhutan formally recognised Bangladesh as an independent nation on December 6 in 1971 just before the final victory on December 16, 1971, Sheikh Hasina said she has never forgot the day because she along with her family members were in prison. “We are grateful for the contribution of the people of Bhutan. In 2012, we honoured Jigme Dorji Wangchuck, the third King of Bhutan, for his outstanding contribution to the great War of Liberation of Bangladesh,” she said.