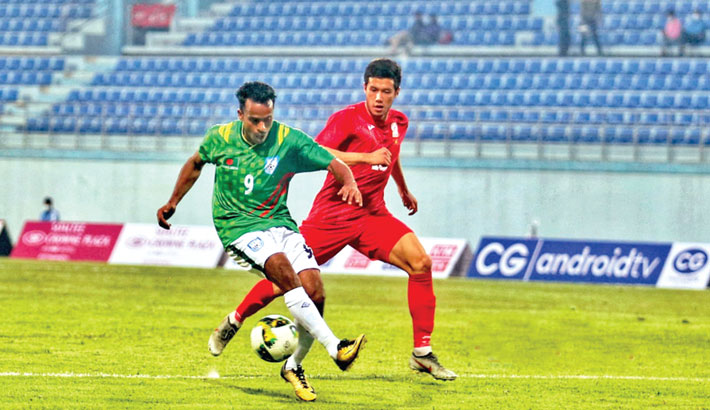 Bangladesh made a winning start in the Three Nations Cup 2021 as they beat Kyrgyzstan U-23 team by a solitary margin at Dasharath Rangasala Stadium in the Nepalese capital Kathmandu on Tuesday.

Kyrgyzstan U-23 team defender Kumarbaj Uulu Baiaman scored an own goal in the first half which decided the fate of the game as none of the teams could score any goal in the remaining minutes.

The win against Kyrgyzstan U-23 team in the opening match has brightened Bangladesh’s chances to play in the final on March 29 at the same venue.

Kyrgyzstan U-23s will take on the hosts Nepal on March 25 and if Kyrgyzstan lost the match as well, both Bangladesh and Nepal will reach the final with one match to spare.

Bangladesh will face Nepal on March 27.

“This match was important for us and we win today (Tuesday). We will try to play even better in the next match,” said skipper Sohel after the win.

The men in red and green got several close chances throughout the match to score but their finishers wasted those opportunities.

A free-kick from defender Habibur Rahman Sohag was smartly denied by Kyrgyz U-23 goalkeeper Tokotaev Erzhan in the 13th minute.

Four minutes later, Bangladesh appealed for a handball while a cross from interim captain Sohel Rana touched the hands of midfielder Tapaev Temirbolot inside the box but the Nepalese assistant referee rejected their appeal.

Bangladesh opened their scoreboard after Kyrgyz defender Kumarbaj mistakenly buried the ball to his own net while trying to clear a cross by forward Saad Uddin in the 30th minute.

Bangladesh continued their dominance in the second half by playing aggressive football but failed to score any other goal.

Bangladesh are also to thank their goalkeeper Anisur Rahman Zico, who smartly saved his post twice in the 27th and 73rd minutes respectively.

Bangladesh made five substitutions in the game as their regular skipper Jamal Bhuyan replaced midfielder Masuk Miah Zoni in the second half.