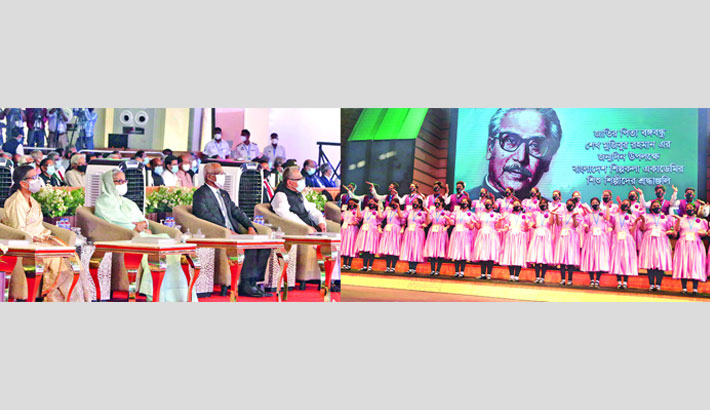 Bangladesh on Wednesday began 10-day nationwide celebrations of the golden jubilee of independence and the birth centenary of Father of the Nation Bangabandhu Sheikh Mujibur Rahman.

The inaugural ceremony of the special festivities took place at the National Parade Ground in the capital in the afternoon where President Abdul Hamid was present as the chief guest.

The national anthem was sung collectively by 100 children to mark the grand opening of the celebrations.

An amazing fly-past by Bangladesh Air Force portraying ‘100’ marking the birth centenary of the Father of the Nation was displayed.

“The ‘Sonar Bangla’ he envisioned is still galvanising the 160 million Bangladeshi people in their pursuit of national rejuvenation,” he said in his video message.

Then the video clip of Prime Minister Sheikh Hasina inaugurating a bust of Bangabandhu presented by the Chinese President was displayed.

“Bangladesh has gone through a remarkable socio-economic transformation in the last 50 years,” he said, adding that it is the time to reflect and celebrate – reflect the legacy of Bangabandhu and celebrate the golden jubilee of Bangladesh’s independence.

Japanese Prime Minister Yoshihide Suga, in his video message, touched on the long and warm bilateral relations between Japan and Bangladesh.

Terming Japan a development partner of Bangladesh, he referred to a number of ongoing development projects in Bangladesh that are being implemented through the association of Japan.

Mark Tully described Bangabandhu as one of the great leaders of the 20th century.

Then the visiting President of Maldives Ibrahim Mohamed Solih delivered his speech as the guest of honour.

Referring to Bangabandhu’s historic Six-Point Movement and March 7 speech, he said Sheikh Mujibur Rahman’s lifelong struggle paved the way for Bangladesh to reach its destiny as an independent nation.

Thanking the Bangladesh President for inviting him to the gala programme, Ibrahim Mohamed Solih also invited Abdul Hamid and Sheikh Hasina to visit his country.

Earlier, Maldives President Solih arrived in Bangladesh at 8:30am on Wednesday on a two-day visit to join the celebrations.

He was received by his Bangladeshi counterpart Abdul Hamid at Hazrat Shahjalal International Airport. He paid homage to the Liberation War martyrs at the National Mausoleum in Savar and later paid respect to the Father of the Nation at Bangabandhu Memorial Museum in Dhanmondi-32.

While addressing the function as the chief guest, President Abdul Hamid urged politicians to take lessons from Bangabandhu Sheikh Mujibur Rahman’s ideals and devote themselves selflessly to serving the country.

Paying tribute to the Father of the Nation, Prime Minister Sheikh Hasina said, “Our freedom is the fruit of the continuous struggle for the status of mother language launched by Bangabandhu Sheikh Mujib on March 11, 1948 with the ultimate target of political, economic and cultural emancipation of Bangalees.”

Referring to UN recommendation for Bangladesh’s graduation to the respectful group of Developing Nations from the list of Least Developed Countries, she said, “Now it's time to move forward. There’s no chance to look behind. Overcoming all obstacles, we shall establish this country as Bangabandhu Sheikh Mujibur Rahman’s non-communal Golden Bangladesh which will be free from exploitation, deprivation, hunger, poverty and illiteracy.”

The opening ceremony was followed by a gala cultural programme featuring the history and heritage of Bangladesh.