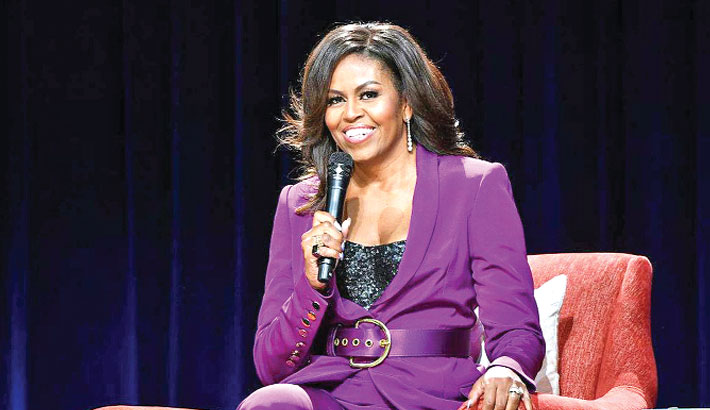 WASHINGTON: Former US First Lady Michelle Obama has said she is "moving towards retirement right now" and being selective with the projects she takes on, reports BBC.

Speaking to People magazine, Michelle Obama said she and her husband were building up their foundation for "so we can retire and be with each other".

Since leaving the White House, both have remained in political life, including campaigning for President Joe Biden. There has also been speculation Michelle Obama would herself run for office.

In the new interview, she opens up about her family's experience during the pandemic - including that of their daughters, 19 and 22, moving home from university.

"Our girls were supposed to have emptied out of my nest," she said. "I was sort of celebrating that they were out building their lives and allowing me the emotional space to let them go. Well, they're back!

"This time has allowed us to get some stolen moments back with our girls," she added, before revealing she had taken up swimming and taught herself to knit to pass time.

The former first lady, 57, also spoke further about comments she made last year about how she was suffering from "low-grade depression".

"That was during a time when a lot of hard stuff was going on," she said. "We had the continued killing of black men at the hands of police. Just seeing the video of George Floyd, experiencing that eight minutes. That's a lot to take on, not to mention being in the middle of a quarantine. Depression is understandable during these times."

Asked about former President Donald Trump's election defeat, Michelle Obama said: "We breathe for a moment, but there's still work to be done.

"That's why Barack and I are focused on developing the next generation of leaders through the Obama Foundation... so that each year we step further out of the spotlight and make room for them."

She said that she had told her daughters that she was "moving towards retirement" and "chasing summer".

"Barack and I never want to experience winter again," she said. "We're building the foundation for somebody else to continue the work so we can retire and be with each other - and Barack can golf too much, and I can tease him about golfing too much because he's got nothing else to do."

The Obama Foundation's website says it wants to "inspire, empower, and connect people" to change the world. It encompasses a number of fellowship and leadership projects, as well as a project to build the Obama Presidential Centre on Chicago's south side.

The couple have also been involved in a number of other projects since leaving office, including each writing memoirs and embarking on a podcast deal with Spotify.

Michelle Obama is also set to star alongside puppets in an upcoming Netflix show that aims to teach children about home cooking.

During her time in the White House, the former first lady led a health campaign around improving child health.