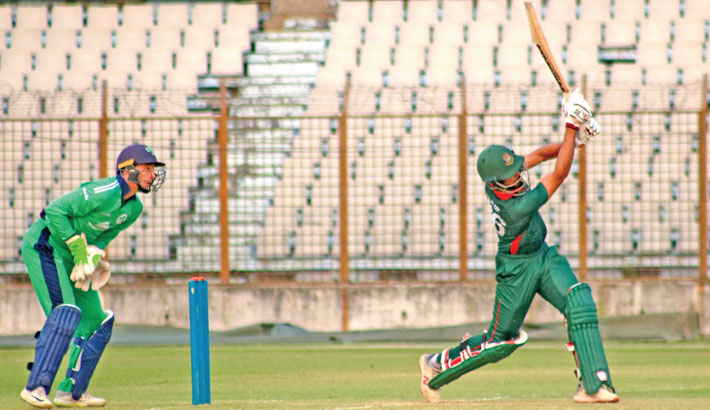 Skipper Saif Hassan led Bangladesh Emerging Team from the front to score a scintillating hundred as the hosts beat Ireland Wolves by six wickets in the third match and take an unassailable 2-0 lead in the five-match one-day series in Chattogram on Tuesday.

Earlier, LJ Tucker scored unbeaten 82 while C Campher and JA McCollum made 43 and 40 runs respectively as the visitors posted 260-7 in their stipulated overs after they were sent into bat first.

The match got a delayed start by two hours after a local support staff attached to the visitors had tested positive for Covid-19.

As per the protocol, a re-test was conducted on the suspected person and close contacts on the same day, according to a Bangladesh Cricket Board press release.

Test results for all these individuals then returned negative and the teams had agreed that subject to negative results from the re-tests the match would commence two hours later than the actual scheduled time.

However, the match remained a 50-over fixture.

Earlier, the first match of the series was abandoned after an Irish player tested positive midway in the contest. However, he tested corona negative in the second test along with all other players and staff which made it possible to continue the series.

Bangladesh Emerging team beat the visitors by four wickets in the second match on Sunday.

Meanwhile, on Tuesday, Ruhan Pretorius was the first Irish man to be dismissed on seven after he was run-out in the 10th over.

McCollum was retired out on 40 but Irish middle-order batsmen all got starts and made a good foundation for the remaining batsmen.

However, Bangladesh team bowlers bowled in the control line and length during the slog overs and restricted them to a gettable total.

Saif made crucial stands from the beginning of the chase and he got good support from the other hand as Bangladesh reached 127-3 halfway through their innings.

Saif struck 11 fours and five sixes for his seventh List-A hundred while Shamim and Hridoy finished the game quickly as Bangladesh team notched their successive victory in the series.

The fourth-match will take place on March 12 at the Sher-e-Bangla National Stadium in the capital.