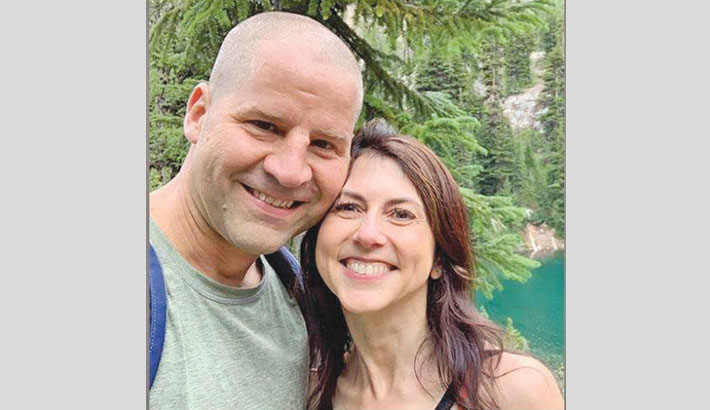 Scott is one of the world’s richest women and has given away more than $4bn (£2.9bn) of her fortune. The news of her marriage to Dan Jewett was revealed via the Giving Pledge philanthropy website.

“Dan is such a great guy, and I am happy and excited for the both of them,” Bezos said in a statement.

Scott, who is worth around $53bn according to Forbes’s most recent estimate, has stated her intention to give the majority of it away.

She has devoted much of her donations on women-led charities, food banks and Black colleges.

Scott was married to Bezos for 25 years and helped him start Amazon in 1994. She is also the author of two novels.

Her Amazon author page now says that she “lives in Seattle with her four children and her husband, Dan.” He teaches at the prestigious school attended by her children.

At the time of their 2019 divorce, Bezos was the wealthiest person in the world, with his stake of more than 16 percent of Amazon. Scott received 4 percent of Amazon’s shares as part of their divorce settlement.

The Amazon founder regularly jostles with Tesla’s Elon Musk for the title as the world’s richest person, which changes in line with the share prices of their companies.

Scott currently ranks the 22nd richest person while Bezos is in top spot with a fortune of $177bn.

The Giving Pledge website was set up for billionaires who have promised to donate most of their fortune to philanthropic efforts.

In a post dated on Saturday, Jewett signed up to the charitable commitment.

“It is strange to be writing a letter indicating I plan to give away the majority of my wealth during my lifetime, as I have never sought to gather the kind of wealth required to feel like saying such a thing would have particular meaning,” Jewett’s post said.

The pledge was started by Bill and Melinda Gates and Warren Buffett in 2010. Bezos hasn’t joined the pledge.

“In a stroke of happy coincidence, I am married to one of the most generous and kind people I know - and joining her in a commitment to pass on an enormous financial wealth to serve others,” Jewett added in his Giving Pledge letter.