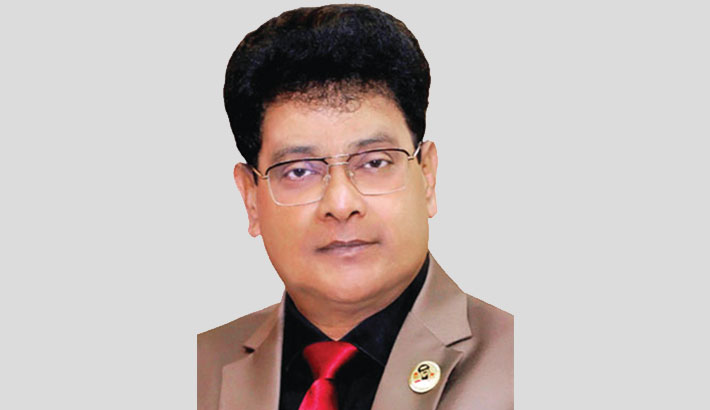 This paper begins with an excerpt from Prime Minister Sheikh Hasina’s own  March 7, 2011 commemoration seminar speech at Osmani Smriti Auditorium: “তিনি বলেন, যতদিন বাংলাদেশ থাকবে ততদিন এ ভাষনের চেতনা ও আদর্শ আমাদের সকলের কাছে প্রেরণার উৎস্য হয়ে থাকবে। তিনি বলেন, এপর্যন্ত অনেকেই ভাষণটির ভিন্ন ভিন্ন দিক ব্যাখা করেছেন, তবে কাব্যিক ছন্দের এই ভাষণের গুরূত্ব ও মাহাত্ম্য জাতীয় ইতিহাসের বিগত ৪০ বছরেও হারায়নি।” Her insight is amazing, as she points to a hitherto unnoticed aspect of the address under discussion. She indicates her hunch that the inner beauty and worth of the epoch-making speech are still waiting to be explored like the gold fields of Australia. She means to say that Bangabandhu’s celebrated 7th March speech has since been searchingly dissected and analysed by many intellectuals from political and strategic point of view but its inherent appeal to the heart as against the head will ever remain fresh and engaging. She wants us to understand that the speech of Bangabandhu is not a mere prosaic expression of a situation or a course of action but a unique blend of head and heart leaving a haunting fascination that compels us to return to its multifarious significance time and again. This is an example of what is meant by ‘medium is the message’. The message here is conditioned by the medium, so much so that we cannot separate the one from the other. Bangabandhu spoke hardly 18 minutes, point by point, without mincing words. The Kvwe¨K Q›` that we hear in the speech of Bangabandhu denotes the iteration of tranquil passions.

His self-confidence was of a type that can shake mountains. It swayed the audience. They discovered their own hopes and aspirations in his words. They identified themselves with the speaker. His difference, herein, lies from a demagogue like Cleon, Alcibiades, Glenn Beck, Joseph McCarthy or Mark Antony in Julius Caesar. A demagogue is an opportunist rabble-rouser seeking to whip up the emotions, passions and prejudices of the unsuspecting masses to gain power or to promote his self-interest. But he is spurned as soon as his tendentious motives are exposed. On the other hand, Bangabandhu’s popularity, respect and homage have unquestionably stood the test of time. His only agenda was welfare of the people of east Bengal. He could talk effortlessly and without premeditation because he did not distance himself from “the other”. He took himself for a man among men and shared their common feelings and aspirations. An internationally recognised book called Poet of Politics (2019) which has been translated into twelve languages and is certified by UNESCO, explores the power and strength of the personality of Bangabandhu Sheikh Mujibur Rahman. The book postulates the implications of 7th March speech, which turned inflammatory. The book consciously quotes the part of his speech in which Bangabandhu announces, “Since we have given blood, we will give more blood. God-willing, the people of this country will be liberated. Turn every house into a fort. Face (the enemy) with whatever you have”. 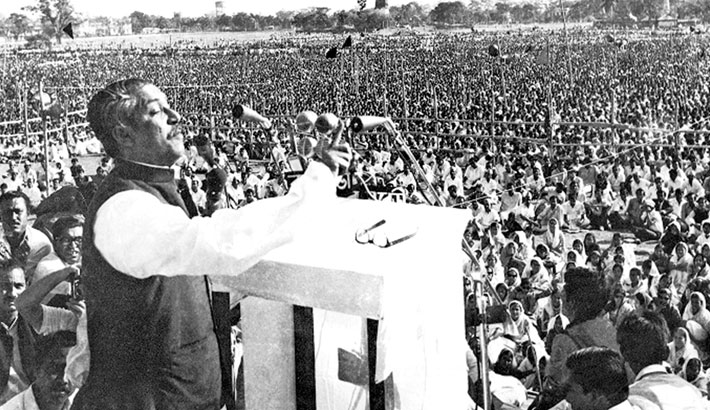 It is analysed that Henry David Thoreau’s famous essay “Registance to Civil Government” is compared with the speech of 7th March where both depicted the exposition of discrepancies and injustices of the autocratic government (Baym 1791). Renowned scholar Dr. Jacob F. Field’s world famous informative and documentary book ‘We Shall Fight on the Beaches: The Speeches That Inspired History’ published in December 2013, treats Mujib’s 7th March speech as the most admirable and charismatic for the schools of thought and intellect. The book further informs that the speech of 7th March by Bangabandhu Sheikh Mujibur Rahman effectively declared Bangladesh’s independence and inspired the nation to fight for their most adorable thing that is - liberation. Because of the mystic power of the speech it has been designated as one of the most rousing and inspirational speeches within the last 2500 years. More importantly, it is realised that the speech delivered at the Race Course ground encouraged the Bengalis to start their nine-month long struggle for freedom.

On March 7, 1971, Sheikh Mujibur Rahman delivered his extraordinary speech in front of thousands of people at the Race Course ground at a key point of history of Bangladesh. In his 20 minute speech Bangabandhu announced: “Ebarer sangram amader muktir sangram, Ebarer sangram, swadhinatar sangram” (The struggle this time is a struggle for emancipation, the struggle this time is for independence). This was the speech that created a nation. He clearly stated that he was bitterly disappointed by the repeated betrayals and treacheries of the Pakistan government and there was absolutely no point in continuing the link with that state any longer. The book Poet of Politics (2019) compiled by G. Mawla underscores the speech of Bangabandhu. Bangabandhu settled the religious dispute by declaring the secular notions for the people.

Deshratna Sheikh Hasina, Bangabandhu’s daughter and 4th-time Prime Minister of Bangladesh has pledged to rapidly implement the vision and mission in conjunction with the ideology of her father. Looking forward to the Golden Jubilee year of the country’s independence in 2021, she declared in her December 2008 election manifesto, a vow to build “Digital Bangladesh” by 2021. It also envisaged a “knowledge-based society” with ICT and global connectivity at an affordable cost. A comprehensive policy on electricity and energy has been adopted. Economic usage of oil, gas, coal, hydro power, wind power and solar energy are being executed. The “Digital Bangladesh” program has been further bolstered in her present premiership by augmenting it to “Vision 2021 through 2041” to materialise Bangabandhu’s “Golden Bangla” and subsequently Bangladesh will be classed as a poverty, hunger and illiteracy free middle income country by 2021 and as a prosperous developed country by 2041. Bangladesh is now one of the economically emerging nations of the world. It has become a role-model for its success in the sectors like health and family welfare, education, womens’ empowerment, Power and Energy.

The sources of the formation of Bangabandhu’s speech made on 7th March is not to be taken as sudden outburst for independence but to be examined as the culmination of hard-earned political challenges and commotions that he underwent with fortitude. The psychological construction, the political conscience and the intellectual texture of the Father of the Nation must be entitled to a few indisputable factors of his life. It is, therefore, accepted that the speeches and statements of Bangabandhu Sheikh Mujibur Rahman are the sources of historic documents for securing social, political, economic, cultural and religious rights. The poetically chosen words of Bangabandhu on 7th March 1971, are very suggestive of the foundations for heroic achievements of independent Bangladesh. The epigrammatic sentences which Bangabandhu made in his extempore speech were tinged with the visionary outputs for Bangladesh. The witty mode of delivery, as the thousands of people experienced at the Race Course ground, formed the constitutional basis and emergence of this country. Where Bangladesh as a country stands now and will appear in the future relies philosophically on his speech. However, it has been anticipated that the crux of the 7th March speech of the Father of the Nation worked as an elixir for social sustainability, economic prosperity, communal integrity and human development and has been recorded as the best piece of address in the last 2500 years of human history.

The author is a columnist, folklorist, writer, Professor of English and former Pro-VC at the Islamic University, Kushtia.