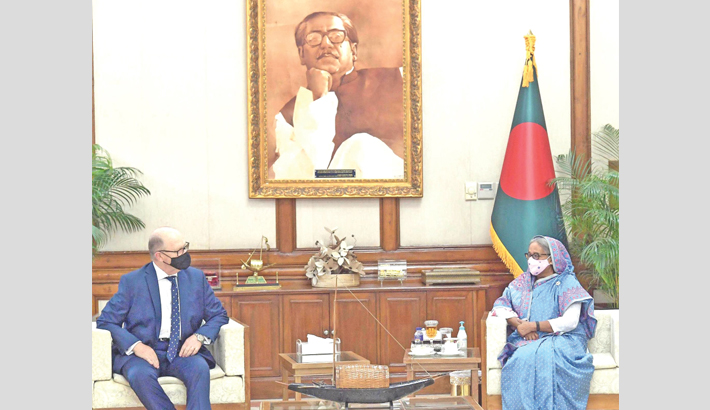 Prime Minister Sheikh Hasina on Wednesday said the government has been able to successfully face the Covid-19 pandemic with united efforts of all sectors and the situation is now under control, reports UNB.

“We’ve engaged all the government agencies, including the administration, armed forces, police personnel, party leaders and workers, to face the challenges and combat the Covid-19,” she said.

The Prime Minister said this when newly-appointed Australian High Commissioner Jeremy Bruer met her at her official residence Ganabhaban.

He said the Prime Minister described the present situation of novel coronavirus in Bangladesh as under control.

Regarding the Rohingya issue, Sheikh Hasina renewed her call to the international community for coming forward to settle the matter. “Bangladesh is continuing its dialogue with Myanmar to send back the Rohingyas to their homeland,” she said.

The Australian envoy highly appreciated Bangladesh’s success in facing the Covid-19 pandemic, saying that Bangladesh is ahead of Australia in vaccination programme.

Putting emphasis on strengthening economic cooperation between the two countries, Jeremy Bruer said his country wants to keep up this cooperation and advance it further.

He also said Australia wants to join a bay cruise with Bangladesh to celebrate the birth centenary of Father of the Nation Bangabandhu Sheikh Mujibur Rahman and Bangladesh’s Golden Jubilee of Independence.

The Australian envoy informed the Prime Minister that he has taken the first dose of novel coronavirus vaccine along with diplomats in Dhaka. PM’s Principal Secretary Dr Ahmad Kaikaus was present during the meeting.