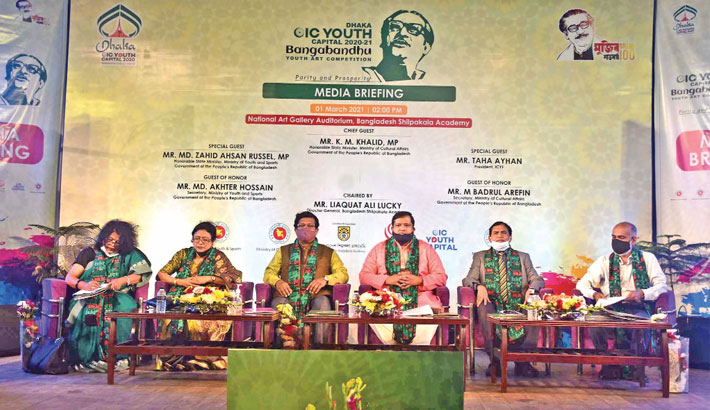 An international art competition for youths from members of the organisation of Islamic countries (OIC) will begin on April 15.

The titled of the art competition is ‘Bangabandhu-Youth Art Competition’.

Marking the birth centenary of Father of the Nation Bangabandhu Sheikh Mujibur Rahman and as part of Dhaka-OIC Youth Capital initiative, Cultural Affairs Ministry and Bangladesh Shilpakala Academy, in association with the Ministry of Youth and Sports and Ministry of Foreign Affairs, will organise the art competition from April 15 to 30.

The details of the competition were announced through a press conference held at the National Art Gallery Auditorium of Bangladesh Shilpakala Academy (BSA) on Monday.

State Minister for Youth and Sports Zahid Ahsan Russel attended the press conference as the special guest. Dr. Fadila Grine, Advisor to the president, ICYF, was present at the programme as the guest of honour with BSA Director General Liaquat Ali Lucky in the chair.

Interested artists aged between 18-35years from the OIC member states and muslim communities of other countries are eligible to apply for the competition.

There are also six categories to participate for the competition such as Bangabandhu and Bangladesh, Corona Pandemic, Humanity in Refugee Crisis, Youth Spirit in Technology, Islamic History and Climate Change.

Interested artists are requested to fill up the registration form (available at http://dhaka.oicyouthcapital.com/program/bangabandhu-youth-art-competition) by March 31.