‘Shikhandi Kotha’ to be staged at BSA today 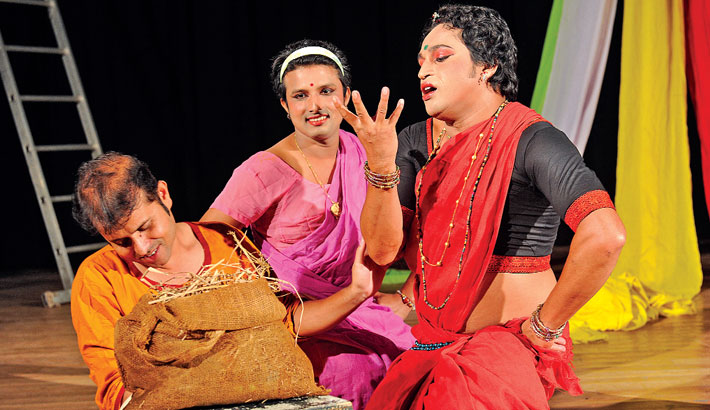 Theatre troupe Mahakal Natya Sampraday will stage their renowned play ‘Shikhandi Kotha’ at the National Theatre Hall of Bangladesh Shilpakala Academy (BSA) today. This will be the 176th show of the drama, which will be staged after a 21-month hiatus.

Written by Anan Zaman and directed by Rashid Harun, ‘Shikhandi Kotha’ has already earned much acclaim at home and abroad as a powerful stage-play on the lives and woes of the transgender community in Bangladesh.

The play sheds light on a group of Hijra (literally known as transgender community but they want their identity as third gender, neither man nor woman) and their common joys, woes and frustrations of everyday lives.

‘Shikhandi Kotha’ narrates the story of a transgender individual, who takes birth into a family as Ratan in a village named Hijaltali.

When the boy reaches his adolescence, Ratan discovers a different gender in him and becomes Hijra with feminine gender identity. As Ratan’s gender problem reveals, the family refuses to accept him.

Tanvir Hasan and Shafiqul Islam are the set designers of the play, while Rafiqul Haque Himel is the stage lights planner. Wahida Mollick and Shubhashish Dutta Tonmoy are the costume planner and makeup artiste respectively.

The play last staged at the Experimental Theatre Hall of BSA on 24 May, 2019.