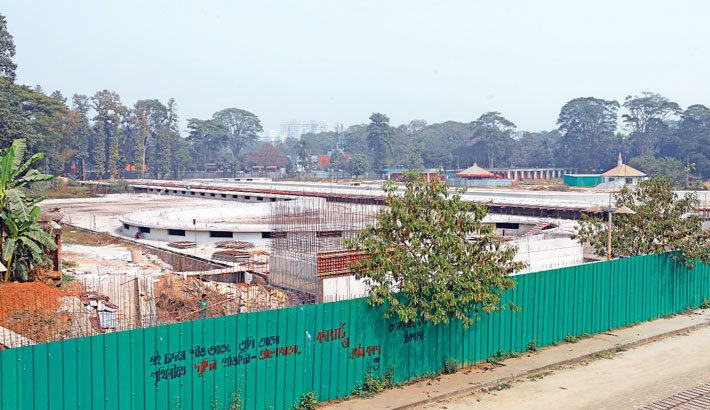 Work of the under-construction Swadhinata Stambha (Independence Monument) is going on at a snail’s pace. The photo was taken on Wednesday. – SUN PHOTO

Development work of the Swadhinata Stambha (Independence Monument) project on Suhrawardy Udyan and Shahbagh Shishu Park in the capital has seen slow progress in the last three years despite the prime minister’s directive to quickly implement the project.

According to official documents, the project (third phase) started in January 2018 and was supposed to be completed by December, 2020 before the golden jubilee celebration of the country’s independence, but the progress of the project has got stuck due to negligence of the authorities concerned.

After a PowerPoint presentation at the Prime Minister’s Office on November 27 in 2019, Prime Minister Sheikh Hasina said that she wanted quick implementation of the monument building projects, including the third phase.

While visiting the project areas recently, this correspondent has found that construction work on a mosque and an underground parking is going on at the Shishu Park and work of walkways is going on at Suhrawardy Udyan but the major work of the project is yet to get momentum.

Now the authorities predict that the Tk 2.65 billion project will be completed by June 2022 without installing modern rides for the Shishu Park.

According to the papers, the project was taken to build underground parking space for 500 vehicles, set up murals of Bangabandhu Sheikh Mujibur Rahman and surrender of Pakistan army, construct walkways, underpasses, a mosque and two substations for electricity, and install attractive rides.

The Ministry of Liberation War Affairs took the project and the Public Works Department (PWD) has been implementing it through National Development Engineers Ltd. (NDE), a private construction company.

“The overall project has witnessed 60 percent in infrastructural progress while the financial progress is 77 percent. We will extend the deadline by one and half more years,” said Habibul Islam, project director of ‘Building Liberation Monument’ project and also a joint secretary of the Ministry of Liberation War Affairs.

They are not getting perfect models of the murals. Besides, they are going for some changes in design and of course coronavirus pandemic is another reason for delay in implementing the project, he said.

“We will skip our plan to install rides at the Shishu Park and bring some changes in building some shades for flower traders,” he added.

Whenever the duration of a government project is extended, the cost also increases. There will be no exception in this project as well.

Project Director Habibul Islam said, “If the implementation of the project is not delayed, we would be able to complete our work within the budget.”

It is mentionable that the duration of the project was earlier extended to June 2021.

“A proposal for extension of the project is underway,” he said.

However, PWD superintendent engineer Feroz Hasan, supervisor of the project, does not see any possibility of completing the project before June 2022.

“We can complete the development project by June 2022,” he said.

Dhaka children’s desired destination Shishu Park has been closed since January 2019 due to the delay in implementing the project.

City children and their guardians have expressed their dissatisfaction because of the long closure of the Shishu Park.

Sabrina Akter, a guardian of a seven-year old boy of Segunbagicha area, said, “My boy has been feeling exhausted for staying in house during the coronavirus pandemic. I could easily take him to Shahbagh Shishu Park as it provided amusement at low cost but the park is closed.”

“I don’t know when the park will begin its operation again. It should be opened as soon as possible for the sake of city children,” she said.

Fresh operation of the project would take more time as Dhaka South City Corporation (DSCC) will start another project after completion of the ongoing monument building project in June 2022.

DSCC superintendent engineer (Mechanical Circle) Anisur Rahaman that they would start the renovation work of the park and they have prepared another development project proposal with a budget of around Tk 7.40 billion for modernisation and installation of attractive rides in the park.