No parking space in most super shops 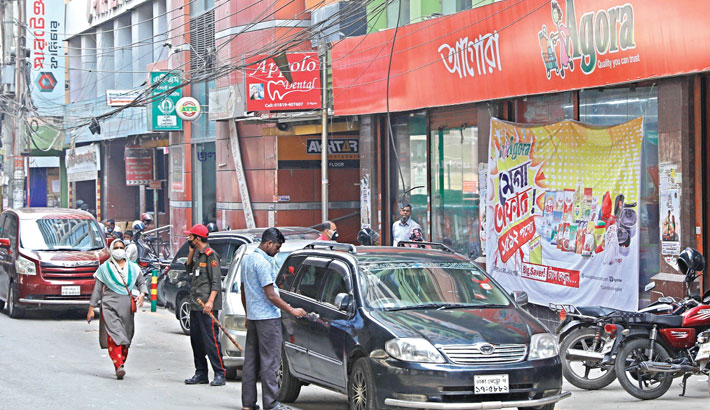 Cars and motorcycles have been illegally parked in front of a super shop in the capital’s Moghbazar area as many commercial buildings do not have parking space. Such parking hampers the movement of pedestrians and vehicles. The photo was taken on Tuesday. – SUN PHOTO

Most of the super shops in the capital don’t have any parking facilities, forcing customers to park their vehicles on roads and footpaths and thus causing traffic chaos in many parts of the capital.

Unauthorized parking on roads and footpaths is largely blamed for traffic congestion in the city, but the authorities concerned are indifferent to the issue.

Many city dwellers said they face difficulties as most of the super shops don’t have any parking lots.

They also said a large number of super shops sprouted beside busy roads and footpaths mostly in busy areas including Dhanmondi, Banani and Gulshan.

“It is unfortunate that a portion of the road is being occupied by a company. While driving my bike, I frequently face this nuisance. There should be an end to this recklessness,” he said.

Mohammad Ali, a resident of Mirpur 1, brought a similar allegation against a super shop in the area.

The correspondent visited several super shops, including an Agora Superstore at Moghbazar and a Lavender Convenience Store Ltd at Gulshan-2 intersection.

During the visit, it was seen that vehicles were parked on roads and footpaths in front of those outlets.

When customers search for space for parking, employees of the super shops advise the customers to park their vehicles on the road in front of the shop.

He said, “While awarding trade license we just check whether the building is recognized as commercial one and we don’t have the authority of checking the parking yard. It is the duty of Rajdhani Unnayan Kartripakkha (RAJUK). If RAJUK permits a building for commercial activities, it must have parking facilities too.”

Rajuk Director (Development Control) Md Mobarak Hossain said it was not the responsibility of RAJUK to inquire who is parking vehicles on roads.

“Road is for vehicle movement, not for parking vehicles. If someone parks their cars on the road, the traffic police will take legal action, not the RAJUK,” he said.

“If there is no parking in a commercial building, we will look into the matter,” he added.

He also said they have been conducting regular drives against the owners who do not have parking spaces.

“We generally take action against them but what is the fault of the customers? We find no parking space in the super shops,” he also said.