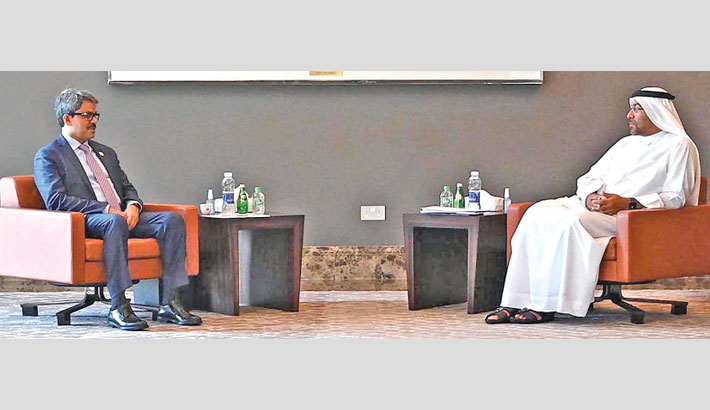 The United Arab Emirates has highly appreciated the wise and visionary leadership of Prime Minister Sheikh Hasina for achieving spectacular economic and social progress in Bangladesh as well as for managing the challenges of the Covid-19.

Shahriar Alam is now visiting the UAE to attend IDEX and NAVDEX-2021 as the representative of Prime Minister Sheikh Hasina, said the foreign ministry.

The entire range of bilateral relations that includes, issues related to participation of UAE leaders in the Mujib Year celebration, joint celebration of 50th anniversary of both the countries, continued support for Rohingya repatriation, holding of next Foreign Office Consultations, cooperation in the field of trade and investment, food security, employment opportunities for Bangladeshi nationals in the UAE etc were discussed.

The two state ministers also discussed on various regional and international issues of mutual interests and cooperation in multilateral forums.

Earlier, the state minister attended the commemoration of International Mother Language and Shahid Dibash at the Chancery of Bangladesh Embassy in Abu Dhabi and paid respect to martyrs of the language movement by placing floral wreath at the makeshift Shaheed Minar setup in the Chancery.

Besides, he also visited the facilities of the new Chancery and exchanged views with the officials of the Embassy in separate meeting.