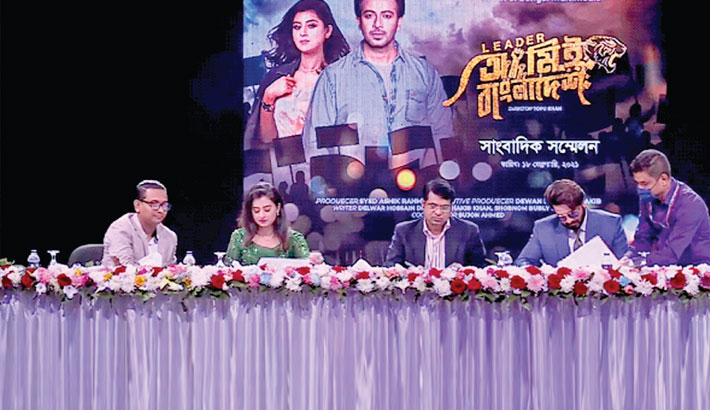 Produced by Bengal Multimedia, young director Topu Khan is directing the movie. ‘Leader: Ami e Bangladesh’ is the debut film of Topu Khan as a director.

This was disclosed at a press conference held at Bengal Multimedia Studio in the capital’s Tejgaon area on Thursday.

Shakib Khan and Bubly also signed a deal with the production house Bengal Multimedia for the film during the press conference.

Bengal Multimedia’s director Syed Ashik Rahman, cast and crew of ‘Leader: Ami e Bangladesh’, actors, directors and others were present on the occasion.

Shakib-Bubly pair’s last released film was ‘Bir’. Directed by Kazi Hayat, the film was released on February14 in 2020.

Shakib Khan is one of the popular actors of Dhallywood. He made his acting debut through the film Ananta Bhalobasha in 1999. Shortly after a few years, Khan established himself as one of the most successful actors. In his career, Khan has received various awards, including three National Film Awards for Best Actor, for Bhalobaslei Ghor Bandha Jay Na (2010), Khodar Pore Ma (2012), and Aro Bhalobashbo Tomay (2015) and Eight Meril Prothom Alo Awards.

On the other hand, Shobnom Bubly started her film career with Shakib Khan through the film ‘Bossgiri’ in 2016. Since then, they have shared the screen together in eight movies. Bubly’s released movies are as well as eight.