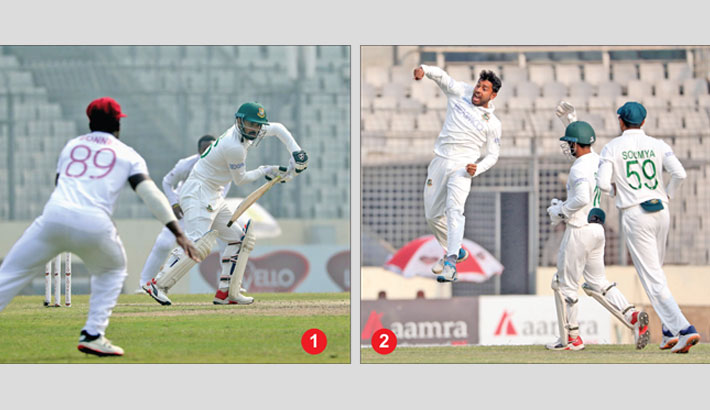 (1) Bangladesh wicket-keeper batsman Liton Das plays a shot during the third day of their second Test against West Indies at the Sher-e-Bangla National Cricket Stadium in the capital on Saturday. (2) All-rounder Mehidy Hasan celebrates after becoming the fastest Bangladeshi bowler to take 100 Test wickets when he sent back West Indies batsman Sheyne Moseley at the same venue on Saturday. —BCB PHOTOS

Spinners held the key as they claimed three quick wickets after stern resistance from Liton Das and Mehidy Hasan that kept Bangladesh’s chances alive in the second Test against West Indies in Dhaka on Saturday.

The visitors were restricted to 41-3 and their lead was extended to 154 runs at the end of third day’s play after Bangladesh were bowled out for 296 runs in their first innings.

Mushfiqur Rahim (54), Liton (71) and Mehidy (57) all struck fifties but none could play big knocks as Bangladesh were dismissed below 300, giving the visitors a very handsome lead of 113 runs in the first innings.

Bangladesh continued to slide in day three as they lost both of their overnight batsmen quickly but they showcased plenty of fight in the latter two sessions.

Mohammad Mithun and Mushfiqur’s 71-run stand for the fifth wicket was undone by Rahkeem Cornwall before Cornwall struck again by dismissing the latter who miscued a shot after attempting a reverse sweep that forced Bangladesh to slide further.

Mehidy and Liton looked confident although Bangladesh were struggling at 155-6 and were eyeing for follow-on and they put up a partnership of 126 runs for the seventh wicket to turn things around.

Liton brought up his half-century with successive boundaries off Nkrumah Bonner while Mehidy helped himself to a half-century by first playing a ramp over the slip cordon off Shannon Gabriel before whipping one through square leg.

The wicketless second session gave Bangladesh a massive hope of salvaging something in their favour but Cornwall (5-74) returned after tea to break their momentum.

The 28-year old first removed Liton and in the same over he also managed to get rid of Nayeem Hasan to complete his second five-wicket haul in Tests.

The Bangladesh innings didn't last long after that as Shannon Gabriel and Alzarri Joseph managed to wrap things up for a big first-innings lead.

Coming to bat in the second innings, West Indies lost skipper Kraigg Brathwaite for only six after he gave a catch to Liton off Nayeem in the fourth over of the innings.

Sheyne Moseley (seven) was the next man to be dismissed who gave a catch to Mithun at second slip off Mehidy and becoming the off-spinner’s 100th grab in Test cricket, quickest amongst Bangladeshi bowlers.

Taijul then dismissed John Campbell for 18, leaving the Caribbean side tottering on 39-3.

Jomel Warrican (two not out) was then sent as the night watchman and he along with Bonner (eight not out) passed the remaining a little over four overs to safely negotiate the final passage of the day’s play.