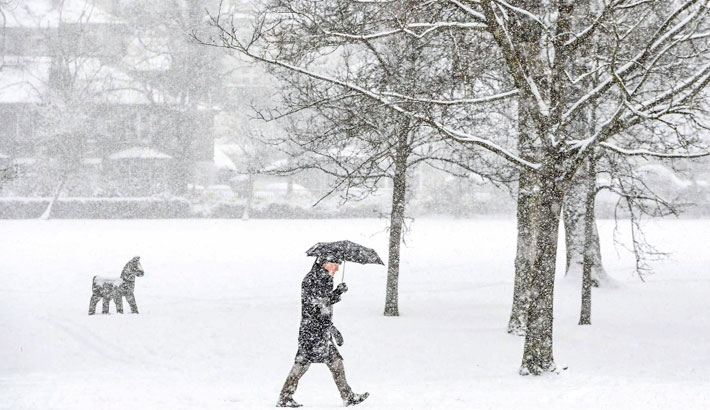 A member of the public walks through the snow in Victoria Park in Glasgow, Scotland, on Tuesday. —AFP PHOTO

BERLIN: Freezing drivers were stranded for hours in traffic jams in Germany and Covid-19 vaccination centres were shut in Britain on Tuesday as Europe was pummelled by the heaviest snow in years, reports AFP.

Traffic on a motorway near the German city of Bielefeld was brought to a standstill by heavy snowfall overnight Monday into Tuesday, with some drivers trapped for at least 16 hours, according to media reports.

The bottleneck, caused by lorries stuck in the snow and stretching over 37 kilometres (23 miles), had still not been cleared by Tuesday morning, local police said.

Video footage showed shivering drivers huddled in their vehicles, complaining of going for hours without food as temperatures plunged to minus 12 degrees Celsius (10 degrees Fahrenheit).

Severe jams were also reported in Hesse, where some drivers were stuck in their cars for 15 hours, according to police.

Transport Minister Andreas Scheuer asked residents to avoid setting out on journeys until Wednesday at the earliest.

Northern and eastern Germany were particularly badly hit on Sunday and Monday night, with blizzard-like conditions and some of the coldest temperatures seen in years.

Police in Saxony-Anhalt said a man had probably frozen to death after he was found buried in snow next to his tractor.

In Bielefeld, a man was found dead on a snow-covered road on Monday, though emergency services said initial findings suggested he had suffered a medical emergency.

In the southern city of Nuremberg, many residents had their heating cut off because of a fire in a power station.

Train services across the country have seen severe delays and cancellations because of the winter weather, with snow and ice clogging the rails.

Snow is expected to decrease in the coming days, according to forecasters, but temperatures as cold as -18 C mean travel conditions will remain hazardous.

With the wind-chill factor, temperatures could feel as low as -30 C at night, forecasters have said.

Heavy snow has also fallen in other countries across central and northern Europe, including Belgium, the Netherlands and Denmark.

Parts of England, Scotland and Northern Ireland were placed on amber alert on Tuesday, with major disruptions expected to road and rail travel, according to the Met Office weather service.

Heavy snow on Tuesday morning drew many families to London’s parks for sledging, while parts of northern and eastern England were expecting up to 15 centimetres.

Some coronavirus vaccination centres in England were forced to close—including major hubs in Ipswich and Colchester—hampering Britain’s rollout.

Schools, currently open only to vulnerable children or those of essential workers, were also closed in southeastern England and Lincolnshire.