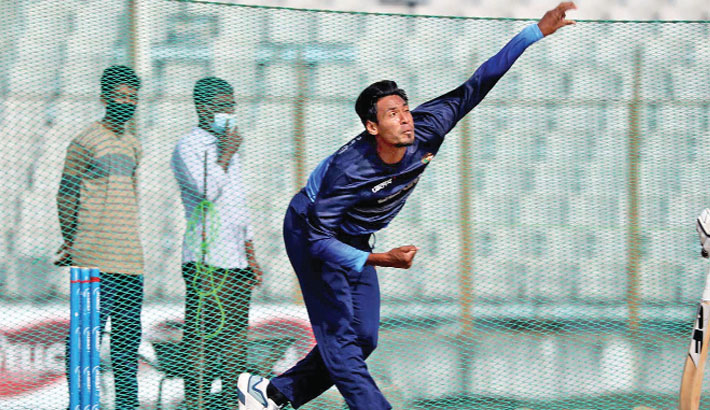 Bangladesh head coach Russell Domingo on Monday said that pacer Mustafizur Rahman is very much in their Test plan and he is likely to make a cut in the first Test squad against West Indies.

Tigers will take on the Caribbean side in the first of two-match Test series on Wednesday at the Zahur Ahmed Chowdhury Stadium in Chattogram which will be their first Test since their triumph against Zimbabwe last year.

Mustafizur has not been part of Bangladesh Test team in their last five Test outings and he last represented Tigers in the longer-format against New Zealand at Basin Reserve in Wellington in 2019.

The 25-year old, however, demonstrated brilliant bowling performances in both domestic and international circuits and he picked up six wickets in the recently-concluded three-match ODI series against the visitors.

Mustafizur showcased terrific consistency in the BCB President’s Cup and Bangabandhu T20 Cup where he claimed eight and 22 wickets respectively which gave Domingo the confidence about his doing well for the Test team.

“I think I have said months ago that Mustafizur will struggle in Tests until he swings the ball back into the right-hander. He has worked really hard with our bowling coach to make sure he gets the shape more consistently,” Domingo said.

“I am sure you can see from his white-ball performances that he has been able to do that. It is still not 100 percent consistent but there has been a big improvement in the way he is shaping the ball.

“He is an experienced and quality performer. He is a left-armer which is a variety. He can also create some rough outside the right-hander’s off-stump for our off-spinners to come into the game. He is definitely an option going into this Test.

“He has trained really well. He is fit. His energy has been great. His skill-level has improved considerably. I definitely see him as part of our Test team going forward, after the improvement we have seen in the last eight or nine months,” he added.

Domingo was also optimistic about getting a positive result against the visitors as they had a good preparation ahead of the first Test.

However, he claimed that they are not taking West Indies lightly as they got several experienced players in their den and performed well during the three-day practice match against Bangladesh Cricket Board XI.

“The preparations have been really good. We got a good week here in Chittagong (Chattogram). The guys have trained hard in the field and gym where they did fitness work,” he said.

“It is a challenge not to play a Test match for nearly a year. Different type of fitness needed for the bowlers. The batters have to bat for a long period of time, so it will be a challenge. But we are pretty confident because we have trained really well. Our preparations have been spot-on.

“West Indies are a proud cricketing nation. They have just come off some big Tests in England and New Zealand, so they’ve had some Tests in the last year, but we haven’t. So if we take them lightly, it will be at our own peril.

“They have some wonderful cricketers in the side. Brathwaite (Kraigg) has been a consistent performer for them. Shannon Gabriel and Kemar Roach are world-class bowlers. We are by no means complacent. We know that they are a formidable side under any conditions. We will have to be on our A-game to compete and come out on the right side of the result against them,” he added.