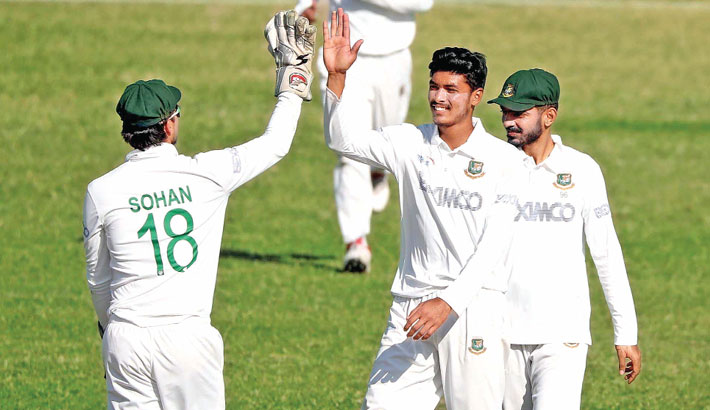 Uncapped leg-spinner Rishad Hossain grabbed a five-for while pacer Khaled Ahmed took three wickets as Bangladesh Cricket Board XI bowled out West Indians for 257 runs in their first innings on the opening day of a three-day practice match in Chattogram on Friday.

Rishad, the 18-year old leggie, brought BCB XI back in the contest after the visitors made a flying start, reaching 110-1 in 31.2 overs at M A Aziz Stadium and he dismissed Shayne Moseley for 15 to give the hosts a much-needed breakthrough.

Skipper Kraigg Brathwaite struck highest 85 off 187 balls while John Campbell and Kyle Mayers made 44 and 40 runs respectively but Rishad demonstrated a brilliant bowling performance to fold up the visitors’ first innings in 79.1 overs.

BCB XI reached 24-0 at stumps with Saif Hassan and Shadman Islam remained unbeaten on 15 and three runs respectively and BCB XI were trailing by 233 runs at the end of first day’s play.

Brathwaite earlier put up two handy partnerships of 67 and 43 runs respectively with Campbell and Moseley after chose to bat first but once Rishad dismissed Moseley, it was all about BCB XI’s bowlers.

“It was a decent innings. I was happy with the time I spent in the middle. I have to keep working hard,” said Brathwaite. Pacer Khaled supported Rishad well from the other hand and gave BCB XI important breakthroughs while Rishad picked up wickets at regular intervals and successfully put pressure on the visiting batsmen.

Rishad finished with 5-75 in 23.1 overs while Khaled, who removed Windies best batsman on the day, Brathwaite, claimed 3-46. Shahadat Hossain and Saif also chipped in with one wicket each.

“I thought the leg-spinner bowled well. He was consistent. The ball wasn’t spinning big but he was very consistent in his line and length. He bowled well,” Brathwaite added.