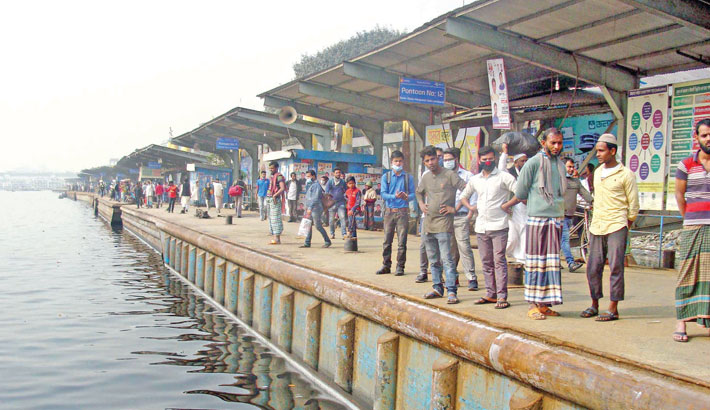 Launch workers go on a sudden strike in the capital on Monday, causing immense sufferings for the passengers. The photo was taken from Sadarghat Launch Terminal in the city on Monday. —SUN PHOTO

Passengers on different routes suffered immensely on Monday as the launch workers enforced a wildcat strike protesting rejection of their fellow workers’ bail petition in a case filed last year.

The passengers particularly on Dhaka-Barisal and Dhaka-Chandpur routes suffered a lot.

BIWTA Joint Director Joynal Abedin said two masters of launches appeared before the marine court on Monday morning to extend their bail, but the court rejected their plea and ordered to send them to jail.

After hearing the news, their fellow workers enforced the sudden strike stopping operation of their vessels.

One year ago, a head-on collision took place between Adventure-1 and Adventure-9 near Chandpur launch terminal.

Though no major casualties occurred in the accident, both the launches suffered major damages.

A case was filed in this connection. Since the case filed, Ruhul Amen and Almas, masters of both the launches, got bail from court. On Monday, both the masters went to court for extension of their bail but the court rejected their bail and sent them to jail.