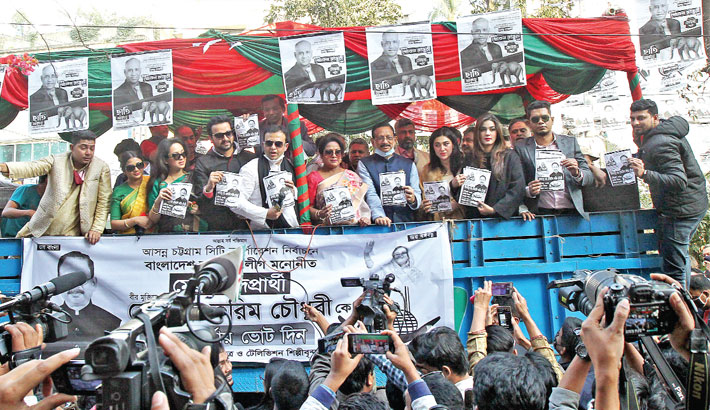 Artistes take part in electioneering in favour of Awami League mayoral candidate M Rezaul Karim Chowdhury in Jamal Khan area of Chattogram on Sunday ahead of the election to the Chattogram City Corporation. —Rabin Chowdhury

CHATTOGRAM: Chief Election Commissioner (CEC) KM Nurul Huda on Sunday assured that election to the Chattogram City Corporation (CCC) will be held in a fair and neutral manner.

The CEC gave the assurance while talking to journalists after attending a view exchange meeting with concerned government officials at Chattogram Circuit House in the city. Nurul Huda said they are hopeful of holding a fair election while the electoral environment in the city is reflecting a message of a participatory election.

“I have talked to 16 higher officials of different departments, including law enforcement and intelligence agencies, and they assured me of tight security measures for holding a credible election,” he said.

Regarding deployment of army in the election, the CEC said they have no plan to assign army as the election will be held with electronic voting machine (EVM). But, armed members of the law enforcement agencies will remain deployed at the polling centres to monitor the activities, he said adding that all involved in the electoral process will play a neutral role during the election.

The CEC also informed that there will have no general holiday on the occasion of the election in the city to ensure presence of voters at the polling centres.  But, service holders including government ones will have to be allowed to practice their franchise, he said.

However, movement of vehicles will be kept limited to hold the election smoothly, said the CEC. Nurul Huda was the chief guest at the meeting presided over by Chattogram Divisional Commissioner ABM Azad.

On the other hand, with only one day in hands for campaign, candidates of the Chattogram City Corporation (CCC) election are making hectic effort to drum up supports of the voters.

A group of actor and actress also joined the electioneering of the ruling Awami League (AL) mayoral candidate M Rezaul Karim Chowdhury on Sunday.  They chanted slogans seeking vote for boat by a truck in different areas of the city.