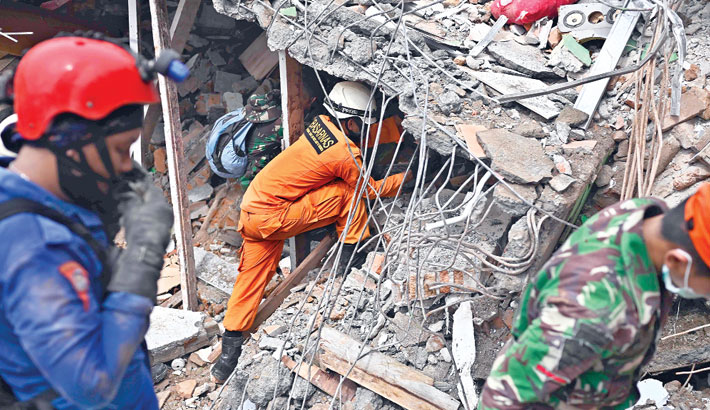 Rescuers search for survivors at a collapsed building in Mamuju city on Saturday, a day after a 6.2-magnitude earthquake rocked Indonesia’s Sulawesi island. —AFP PHOTO

At least 46 people died after the 6.2-magnitude quake struck in the early hours of Friday, triggering panic among residents of the island, which was hit by a 2018 quake-tsunami disaster that killed thousands.

Search-and-rescue worked through the night as they pulled dozens of bodies from beneath crumpled buildings in Mamuju, a city of about 110,000 people in West Sulawesi province, where a hospital was flattened and a shopping mall lay in ruins.

Others were killed south of the city after the quake struck, as a strong aftershock jolted the area Saturday morning.

Grieving relatives began burying the dead at a local cemetery.

Planes and boats packed with food and other emergency supplies were arriving, with the navy reportedly sending a ship equipped with mobile medical services as Mamuju’s still-standing hospitals were flooded with hundreds of injured.

Rescuers said a shortage of heavy equipment was slowing the search effort, while thousands left homeless by the quake set up makeshift shelters on higher ground—many little more than tarpaulin-covered tents that were lashed by heavy downpours.

“We’re running out of food. There hasn’t been any aid from the government yet,” 24-year-old survivor Desti told AFP from hard-hit Majene, adding that some survivors at the camp needed medical attention.

“Some people are using coconut leaves as mats,” she added. Many survivors are unable to return to their destroyed homes, or too scared to go back fearing more quakes or a tsunami, said Desti, who like many Indonesians goes by one name.

Authorities have not given a figure for the number of residents who could still be trapped under buildings reduced to twisted metal and concrete chunks, including the hospital that collapsed with more than a dozen patients and staff inside. On Saturday, authorities said they had pulled eight corpses from under the building, while five members of a family of eight were found dead in the crumpled remains of their home.

Among the Mamuju survivors was a pair of young sisters plucked from under the mass of concrete and other debris. The pair are now being treated in hospital.

The Pope said he was “saddened” to learn of the quake. “His Holiness Pope Francis expresses his heartfelt solidarity with all those affected by this natural disaster,” the Vatican said in a statement.

“He prays for the repose of the deceased, the healing of the injured and the consolation of all who grieve.”

Landslides triggered by the heavy rains and quake blocked the main access road out of the seaside city, scuttling some residents’ efforts to flee.