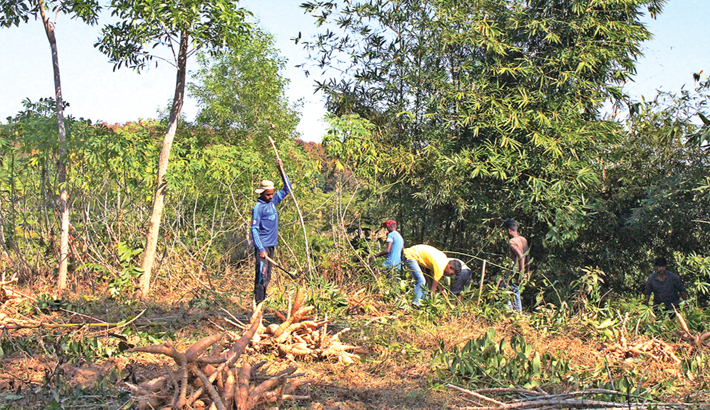 The farmers are showing interest to harvest cassava with the assistance of PRAN. At this moment, about 2000 farmers are now harvesting cassava under the PRAN’s contract farming.

PRAN is now collecting the cassava from the contractual farmers for this season and aims to collect 30000 tonnes of cassava, said a press release.

Cassava is a root crop which is planted in fallow lands and hilly areas with a little cost and labor. In Bangladesh, the crop is popularly known as ‘Shimul Alu.’

Mahatab Uddin, Chief Operating Officer at PRAN Agro Business, said, “PRAN introduced contract farming of cassava in 2014. The conglomerate has been encouraging the farmers to grow the new crop under its contract farming. Through the cassava project, the hilly and fallow lands are being used and the famers are also being benefitted economically. PRAN is encouraging the farmers by conducting training programs, giving financial assistance and providing instruments and seeds at a low cost.”

He also said, “Both cultivation and collection have been occurred at a time. Farmers started collecting crops in November last year and will be completed in May this year. After collecting the crops, they plant the seeds. Till December last year, we have collected 5000 tons of cassava. Farmers are now showing interest to cultivate cassava because they are being benefitted economically and getting more crops.”

Kamruzzaman Kamal, Marketing Director at PRAN-RFL Group, said, “PRAN has a cassava processing plant in Habiganj Industrial Park under its sister concern Sylvan agriculture Limited where sixty thousand tons of cassava can be processed in a year.”

PRAN is manufacturing starch from Cassava and the starch is now being widely used in garment, pharmaceuticals and processed food industries. Besides, it can be used as a boiled food and animal foods. So, people can cultivate cassava in fallow lands around their house and it will to help our economy.”