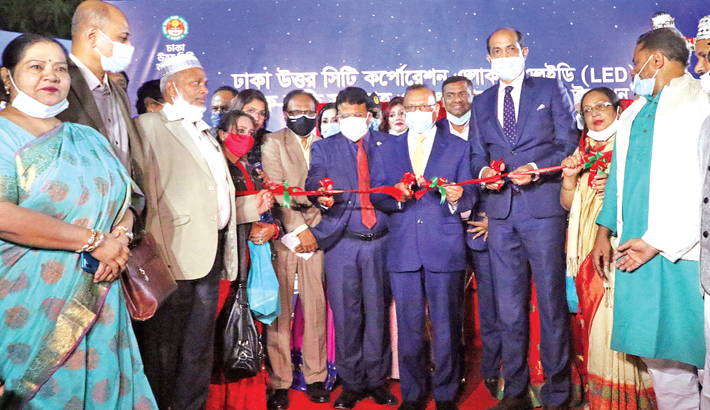 Local Government, Rural Development and Cooperatives Minister Md Tazul Islam and DNCC Mayor Atiqul Islam along with others cut a ribbon at Agargaon in the capital on Friday to inaugurate the installation of 46,410 LED lights in DNCC areas. - SUN PHOTO

He said, “The LED lights from Europe will last for 22 years. It will contribute to reducing carbon dioxide.”

Speaking on the occasion, the mayor asked canal grabbers to retreat and free the land.

He warned, “You cannot stay on canal land anymore. We will recover our canals as per CS record, not city survey. We will start development and beatification works very soon.

Minister Tazul Islam said, “DNCC takes an initiative to remove the darkness of the city with LED lights. The journey started today.”

“We will build habitable and eye-catching Dhaka in the future and we are working to this end. There are many problems in Dhaka and gradually we are solving all troubles,” he also said.

He suggested constructive criticism about the development project of the government.

DNCC sources said the city corporation embarked on LED supply and installation project in 2017 with a budget of Tk 3.6 billion and the installation work will be completed by December this year.