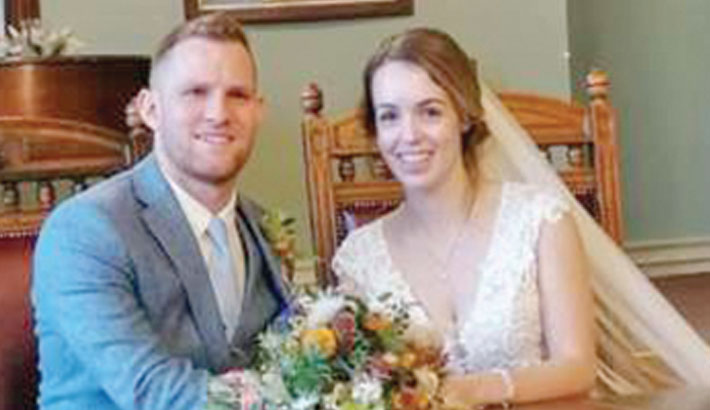 Two British paramedics who had to cancel their wedding four times amid the coronavirus pandemic have finally got married, reports BBC.

Rob Stewart, 30, and Beth Griffin, 25, who saw their original March wedding cancelled by the first lockdown, wed in Worcester on Sunday.

Stewart said the day was “amazing”, adding: “The snow made it even more special.” They will have one day off before working together again for West Midlands Ambulance Service. The Worcester couple married in the city’s Guildhall, followed by a small reception at Wayland’s Yard.

They were “relieved” the city remained under tier two restrictions, so were able to hold a reception for 15 guests.

“I’m so glad to be in tier two, as much of the country is not - so we were quite lucky with that,” Stewart said.

Wedding guests included Beth’s 91-year-old grandfather David, and the paramedics were given the free use of two Rolls Royces by Worcestershire Wedding Cars.

“Getting married was always our priority,” said Stewart. “And everybody has been really supportive.”

After their first wedding was cancelled, they rearranged the wedding to March 2021. But changed their plans after it was announced in September that a wedding guest limit of 15 could be in place for six months.

They re-booked for 28 November, but this had to be cancelled too after the second lockdown in England was announced.

The couple then sought a “last-minute” wedding ahead of the lockdown, but discovered they had not given the 28-day legal notice.

Stewart said they had been helped by the flexibility of wedding venues and suppliers, and the ambulance service.

“It was a really nice little reception,” he said. “A lot of friends and family have been stuck in a room working from home on their own, so it was really nice to actually meet up.”