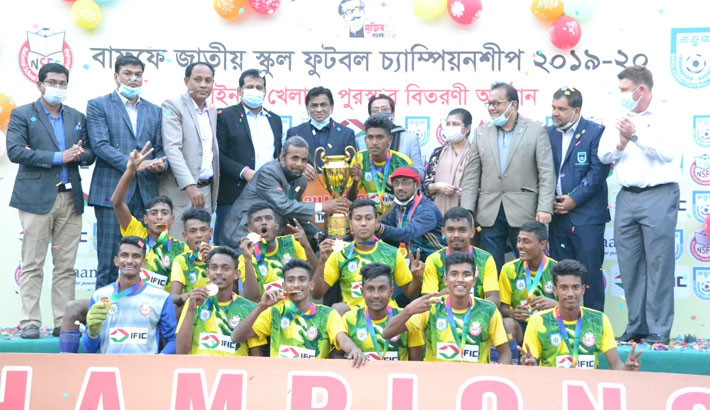 Captain Ramjan Sheikh, Hasan Hawladar, Tamim Hossain and Mirazul Islam scored one goal each for the winning side. In a post match reaction, the winning team captain Ramjan said, “We have played for the first time in this competition. We never thought of the championship. We started the meet (final phase) with a defeat because we played only 10 members in the first match here. Most of our players failed in medical tests.  Later, we brought 3 more players from districts, among them one tested positive for COVID-19. We have played 12 players in the final.”

The champions were awarded by Tk 1,00,000  while runners-up team Tk 50,000. Hasan Hawladar of Bagerhat Collegiate School adjudged the man of the final and his teammate Habibur Rahman the best goalkeeper. Muntadir Fuad Ibne Nur adjudged the best player and top scorer of the tournament scoring 4 goals in the final phase of the competition.

Meanwhile, the final round of the school football began on Dec 18. Eight teams, split into two groups, take part in the competition. Earlier, a total of 57 schools from 57 districts took part in the first phase of the meet held last March.