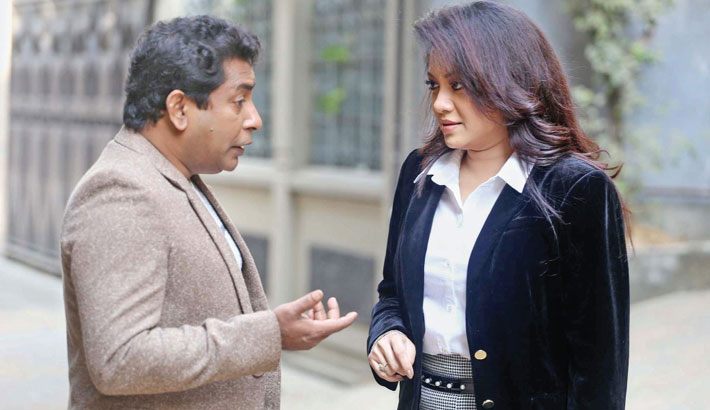 Mosharraf Karim and Tareen Jahan are two popular actors of the country. They have won the hearts of millions by their fabulous acting.

Recently, the duo stood before camera for the shooting of a drama titled ‘No Prem No Biya’ after a long hiatus. Shohel Hasan has written and directed the drama.

The shooting of the drama took place at a location in the capital on December 19 and 20.

Talking about the drama, Mosharraf Karim said, “The story of the drama is amazing. I hope we will produce a good drama for the audience. Tareen Jahan is also a versatile actress. I like her acting. After a long hiatus I have worked with her. I always enjoy working with her.”

Taren said, “Mosharraf bhai is one of the talented actors of the country. As a co-artiste he is very cooperative. And my working experience with him is also excellent.”

“It is my first work under the direction of Shohel Hasan. I hope the audience will enjoy our new drama,” Tareen added.

The drama will be aired on a television channel soon, said director Shohel Hasan.

K M Mosharraf Hossain, known by his stage-name Mosharraf Karim, is a popular films and television actor.  He began working as a theater artiste in late the 1980s with ‘Nattokendro’, where he has played lead roles in many popular theatre productions for 16 years continuously. He emerged on the television dramas in 1999, with the single-episode TV play Atithi, directed by Ferdous Hasan and rose to fame for his natural acting and expressions.

Tareen Jahan is a popular actress, model and singer. Jahan got her first major role as a child actor in the TV drama serial ‘Ei Shob Din Ratri’ then she acted on the mega serial named ‘Songsoptok’, based on the novel by Shahidullah Kaiser, as a child artiste in 1988. She started her career as a lead actress in Bangla drama named ‘Kathalburi’ against Tauquir Ahmed.