Dream gets closer to reality 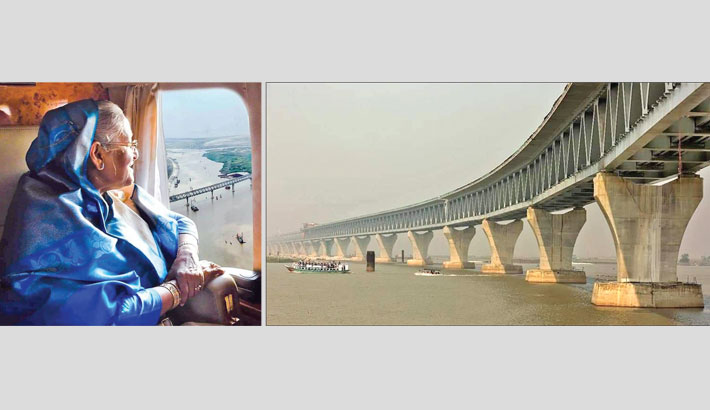 A file photo shows that Prime Minister Sheikh Hasina witnessed construction work of Padma Multipurpose Bridge through the window of a helicopter. With the installation of the last span on Thursday, the entire 6.15-km mega structure built over the mighty river Padma is now visible. —sun photo

The last span of the much-talked-about 6.15km Padma Bridge was installed on Thursday, making the mega infrastructure fully visible with a quantum leap in fulfilling the long-cherished dream of the people from southern and southwestern districts.

With the installation of the 41st span, the construction of the country’s largest bridge is nearing completion, much to the excitement of the people from the both sides.

“Both the banks of the River Padma were linked with the 41st span of the Padma Multipurpose Bridge installed at 12:02pm. The dream has come true,” Padma Bridge Executive Engineer Dewan Md Abdul Quader informed.

The major construction work of the steel truss double-deck main bridge over the mighty river that cut off southern districts from the capital has come to an end.

The skepticism, technical complexities and financing issues have also ended after Prime Minister Sheikh Hasina made a bold decision to build the mega bridge with own resources following a financing tussle with the World Bank.

“The Padma Bridge is now visible after many hurdles were overcome under the efficient and farsighted leadership of daughter of the Father of the Nation Prime Minister Sheikh Hasina,” Road Transport and Bridges Minister Obaidul Quader said in his reaction.

The bridge is expected to enhance national GDP by additional 1.2 per cent while poverty is expected to be curtailed by 0.84 percent per year as it will directly benefit the country’s 40 percent population.

The 6.15km mega road-cum-rail bridge is being built with the help of 150-metre 41 steel truss spans which have been installed on 42 piers.

As a breakthrough of the dream project marred by much uncertainty, the first span was installed on September 30, 2017.

The completion of all the span work and mounting them on dedicated piers have taken three years and two months more time as the project had to face technical and other difficulties, including piling problem, bad weather and the corona pandemic.

Span installation work faced a pause of four months until early October 11 this year after 31st span was installed on June 10.

Strong current in the river due to a prolonged rainy season barred the floating crane from reaching the designated piers in these four months.

In the last two months, project engineers accelerated the span installation work and were able to install the rest of eight spans, four each month, to meet the December 10 deadline set earlier by the bridge division for completing all the span work.

Wearing a festive mode, the world’s largest floating crane Tian-E carried the last span, decorated with flags of Bangladesh and China, 20 metres away from piers 12 and 13 on Wednesday so that the installation work becomes less hectic.

Project engineers started their work from around 9:30am on Thursday and mounting the 41st span took them nearly 2.30 hours. Enthusiastic people and the media thronged the project site to enjoy historic moment. However, law enforcers maintained strict security there.

With the completion of the superstructure, construction of the main bridge has advanced 91 per cent, the road transport and bridges ministry said.

Overall progress of the Tk 301.93 billion project stands at 82.50 per cent, while river training work has progressed 76 percent so far.

However, Cabinet Secretary Khandker Anwarul Islam at an event on Covid-19 economic recovery on Thursday hinted that the bridge might be opened to public in June 2022.

“Padma Bridge is now true. Now, it is physically complete. I think that by June 2022 we will open Padma Bridge,” said Anwarul, who looks after the project. Immediately after taking office in early 2009, the Awami League-led government took a concrete initiative to construct the bridge to remove the division between the two large parts of the country created by the Padma.

After an open bidding, Chinese construction firm China Major Bridge Engineering Company (CMBEC) was awarded the contract of the main bridge at a cost of Tk 121.33 billion, while another Chinese firm Sinohydro Corporation got river training work for Tk 87.08 billion.

Sheikh Hasina laid the foundation stone on July 04, 2001 when she was Prime Minister. The Jica placed a detailed feasibility study in 2004, suggesting constructing the bridge at Mawa-Jajira point.

The much-hyped bridge will connect 21 districts in the south.Moreover, direct communication will be established between Mongla seaport and Benapole land port via capital Dhaka and Chattogram.