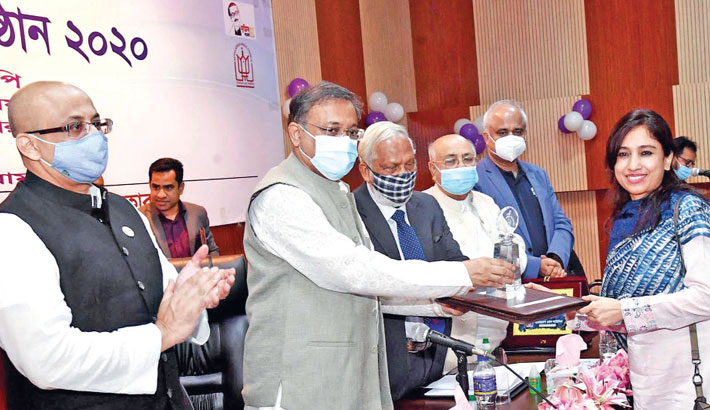 Information Minister Dr Hasan Mahmud hands over a crest and a certificate to a journalist at the Bangladesh Press Council Award-2020 giving ceremony at the auditorium of Tathya Bhaban in the capital on Saturday. State Minister for Information Dr Md Murad Hassan was also present. —SUN photo

Urging all to remain alert against plotters, Information Minister Dr Hasan Mahmud on Saturday said everyone should remain alert against the conspirators who choose the path of fundamentalism, conspiracies and rumours after failing to face the government politically, reports BSS.

“Whether one admits it or not, Bangladesh is moving ahead today by overcoming all obstacles and limitations. We left behind Pakistan in all indexes including human, social and economic indexes,” he said.

The minister made the comments while addressing the Bangladesh Press Council Award 2020 giving ceremony at the auditorium of Tathyo Bhaban in city’s Kakrail.

Hasan said some people in Bangladesh don’t want to admit the progress while there were huge discussions according to a study of Asia Development Bank. “Our political opposition choose the path of fundamentalism and conspiracies after being failed to face politically. Everyone should remain alert against them,” he added.

According to the Asian Development Bank, India and Pakistan are fighting over this, but some people in our country do not want to admit it.

About increasing the capability of press council, the minister said the law of the council would be modernized. Mass media witnessed a vast revolution in during the last decade under the dynamic leadership of Prime Minister Sheikh Hasina, said Hasan, also AL joint general secretary.

In line with the progress, the capability of the Press Council would be increased. For this, work is going on to modernize the existing law, he added.

Urging the media personnel to expand the role of mass media, the information minister said, “We should develop our mind along with infrastructure development to build a developed nation. Mass media could play a pivotal role to this end.”

Dr Murad Hasan said there is a rapport between freedom, democracy and development. And the mass media could play an important role in this regard, he added.