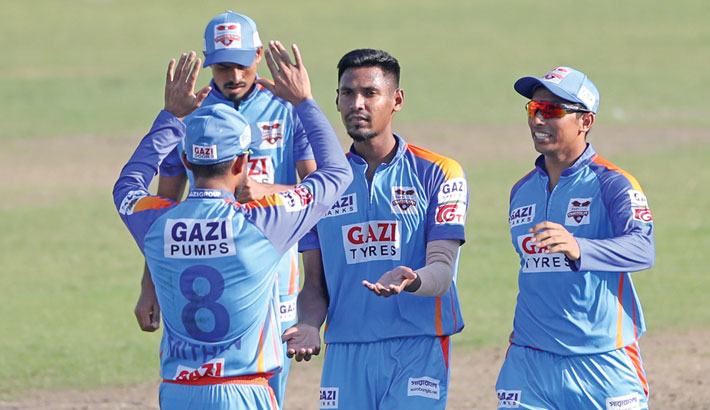 It was all too easy for Gazi Group Chattogram in their Bangabandhu T20 Cup encounter against Gemcon Khulna as the star-studded Khulna were bundled out for 86 -- the lowest total of the five-team tournament so far- and later a blistering unbeaten fifty from stylish opener Liton saw Chattogram chase down the meagre total in just 13.4 overs.

Mustafizur picked up four wickets while Taijul Islam and Nahidul Islam took two wickets each forced Khulna to put the lowest team total so far in the tournament.

With the back-to-back wins by big margins Chattogram were on the top of the points table with a healthy net run-rate while Khulna suffered their straight second defeat after their miraculous last over win in the opening game.

Mustafizur, the only Grade A player of Chattogram, made it difficult for Khulna batsmen since being introduced in the sixth over. After giving away just two runs in his first over, the left-armer picked up the wicket of Shamim Hossain in his second over giving away just a single run in that over.

The left-armer bamboozled the Khulna batsmen with his cutters as he finished with impressive figures of four for just five runs in his 3.5 overs. He also scalped the wicket of Ariful Haque, who shone with the bat for Khulna in their previous two matches, after the right-hander scored a 30-ball 15.

It was yet another poor batting display from the Mahmudullah Riyad-led Khulna. Imrul Kayes' 21 off 26 deliveries remained the top score of Khulna as only three other batsmen reached double figures on the day.

Khulna's top all-rounder Shakib Al Hasan, who returned to cricket after a year-long ban, scored three off seven deliveries. The top all-rounder however today became only the second player after West Indies all-rounder Dwayne Bravo to have reached the double of 5000 runs and 350 wickets in the format.

Shakib, who had already scalped 355 wickets in T20s, reached the milestone of 5000 T20 runs in today's game but the 33-year-old departed soon after achieving the feat.