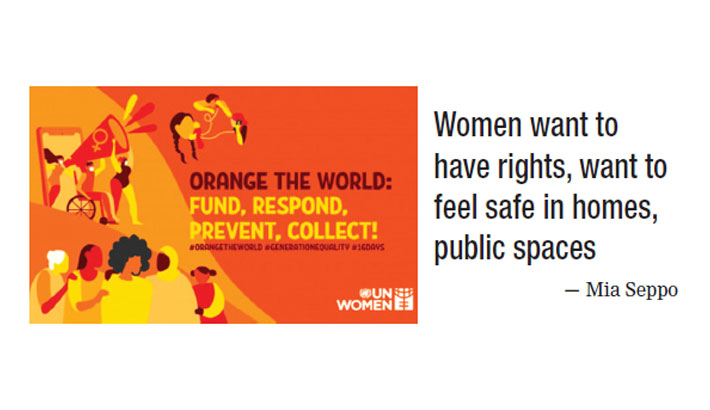 The UN in Bangladesh in partnership with the Ministry of Women’s and Children’s Affairs and civil society organisations held a virtual dialogue to mark the International Day for the Elimination of Violence Against Women.

State Minister for Women and Children Affairs Fazilatun Nessa Indira formally inaugurated this year’s 16 Days of Activism against Gender Based Violence on Wednesday as the chief guest.

Under this year’s theme “Orange the World: Fund, Respond, Prevent, Collect”, the dialogue provided a platform to further discuss strategies for coordinated efforts to address sexual violence and strengthen accountability.

In light of the recent public outcry, the UN family continued its efforts to dismantle misunderstanding around rape, changing its narrative and advocate for concrete actions to tackle it, said a press release of the Un Women.

In this regard, three experts meetings on actions against sexual violence were held on 22nd November to further gain experts’ recommendations on how to accelerate efforts to end sexual violence. This discussion was informed by last year’s 10 Actions against rape endorsed by the GoB, UN, development partners and civil society.

The overarching outcome emerging from the Dialogue was that society must work together to change the narrative of rape and shift from blaming victims to holding perpetrators accountable.

As highlighted by UN Resident Coordinator Mia Seppo said, “Women demand accountability, they do not want to be protected, they want to have their rights, respecting it, they want to feel safe in their homes and in public spaces. Women require safety at homes and in public spaces. Bangladesh government needs to accelerate the process of legal reform to outlaw marital rape and discriminatory laws once and for all.”

Throughout the dialogue, panelists and participants discussed possible action steps to achieve this, including major legislative reforms, an overhaul of the justice response and essential services, improved data collection and monitoring, comprehensive sexuality education in our schools, and the strengthening and expanding of institutional partnerships to prevent impunity.

An open discussion was moderated by Farah Kabir, Executive Director, Action Aid, Bangladesh focused mostly on the pervasive culture of rape in Bangladesh. Umama Zillur, founder of KOTHA, urged the audience “to connect the dots” between the prevailing culture of rape and the high prevalence rates of sexual violence: a culture that “breeds incidents” of sexual violence.

Participants also discussed how this culture was leading to a protectionist response, in which women and girls are being withdrawn from public spaces to ensure their safety, instead of placing emphasis on making public spaces safe for all.

Judith Therbertson said, “We need to work together to change the social norms that condone such violence through victim blaming and the normalization of what we hear, and to identify the most effective ways to prevent the violence even before it starts.”

In response to the different recommendations and call for actions, Abul Hossain said, “We have developed the National Plan of Action to End Violence against Women, which is being implemented, as a form of multi-sectoral approach to work together with various stakeholders to end violence against women across the country, and the world.”