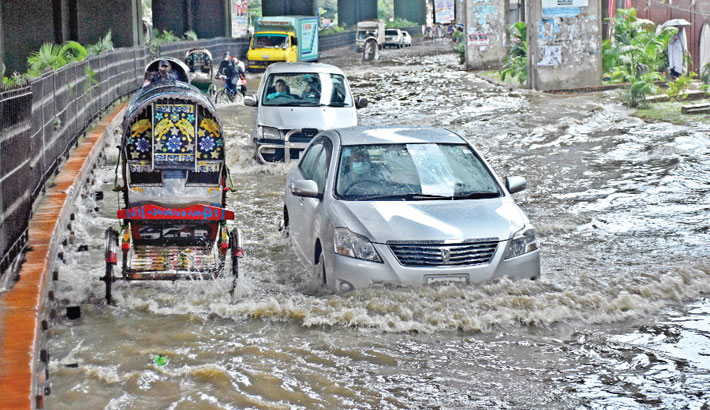 Incessant rains disrupted daily life across the country on Friday as the deep depression over the Bay of Bengal moved north towards the coasts of Khulna and India’s West Bengal after losing its intensity.

Bangladesh Meteorological Department (BMD) has lowered the cautionary signal for maritime ports by one notch to No. 3 on the day.

Incessant rains hampered the regular life across the country while it created stagnant water and affected the movement of the city dwellers in Dhaka, Chattogram, Khulna and elsewhere in the country.

Waterlogging coupled with dilapidated roads, unplanned digging of lanes and by-lanes and potholes are causing immense suffering to the city dwellers.

The Depression over northwest Bay of Bengal off West Bengal and Bangladesh coasts moved north-northeastwards with a speed of 25 kmph during past six hours, crossed West Bengal and adjoining Bangladesh coasts near latitude 21.8°N and longitude 88.5°E between 1130 & 1230 hrs IST on the day as a Depression with maximum sustained wind speed of 45- 55 kmph gusting to 65 kmph, forecasted Indian Meteorological Department.

It is very likely to move further north-northeastwards maintaining the intensity of Depression for the next 12 hours and weaken thereafter into a Well Marked Low-pressure area over Bangladesh, it said.

IMD projected that the depression crossed West Bengal and adjacent Bangladesh Coast during 6:30 to 9:30 pm on Friday and likely turned into a well-marked low on Saturday.

Around 400 tourists have been stranded at Saint Martin’s Island in Cox’s Bazar since Thursday due to inclement weather condition.

Among the tourists, there is a group of 300 travellers from Cox’s Bazar who went on a three-day trip to the island last Wednesday.

Hafizur Rahman, Officer-in-Charge of Teknaf Model Police Station, said the tourists are safe and the police outpost at the island has been instructed to keep an eye on them.

Maritime ports of Chattogram, Cox’s Bazar, Mongla and Payra have been advised to keep hoisted the local cautionary signal No. 3, he said.

Meanwhile, parts of Dhaka, Chattogram, Barishal, Khulna and Sylhet, among others, are likely to witness ‘heavy to very heavy’ rainfall due to the depression.

Under the influence of depression, the low-lying areas of the coastal districts of Satkhira, Khulna, Bagherhat, Jhalokathi, Pirozpur, Borguna, Patuakhali, Bhola, Barishal, Laxmipur, Chandpur, Noakhali, Feni, Chattogram and their offshore islands and chars are likely to be inundated by the wind driven surge height of 03-05 feet above normal astronomical tide, forecasted BMD on Friday.

Due to the presence of the depression, heavy to very heavy rainfall is likely to occur at many places of Chattogram, Barishal, Khulna, Dhaka, Sylhet, Mymensingh, Rajshahi and Rangpur divisions.

All fishing boats and trawlers over North Bay and deep sea have been advised to remain in shelter till further notice and advised not to venture into the deep sea.

Meanwhile, launch services on Barishal’s internal routes were suspended on Friday morning due to inclement weather.

Movement of all launches, ferries and sea-boats remained suspended along the Shimulia-Kawrakandi river route due to strong currents in the Padma River, causing huge suffering of the passengers and transport workers.

“Hundreds of vehicles are waiting to cross the river as the ferry services were disrupted.

The suspension has been in place from 4 pm Thursday following an order issued by the Bangladesh Inland Water Transport Authority. It is causing “untold sufferings” to hundreds of passengers.

Ferry services on the Shimulia-Kawrakandi route remained suspended for nine days, while the operation of launches, speedboats and trawlers stopped two days ago.

Meanwhile, no ferries have been operating on the route overnight for almost 56 days.

The service disruption has triggered long tailbacks on both ends of the route amid heavy rains.

BIWTA Assistant Director Shahadat Hossain said river ports in Shimulia have been asked to hoist the local cautionary signal No. 2.

Launch and speedboat services will resume once the situation improves, he added.