100MW solar plant on west bank of Jamuna on cards 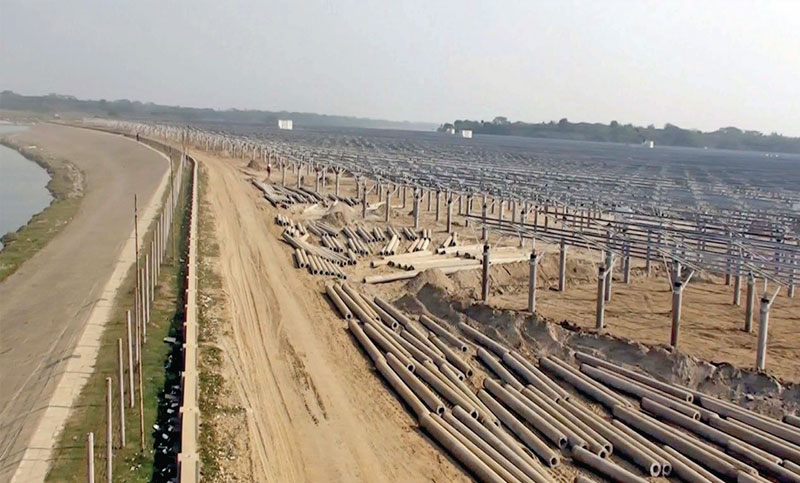 The government is likely to set up a large solar power plant having capacity of generating 100MW electricity on the west bank of the Jamuna River as part of its efforts to expand use of clean energy.

The power plant will be set up on 214 acres of leased land of Jamuna Multi-purpose Bridge authorities at an estimated cost of Tk 8 billion.

According to International Renewable Energy Report, Bangladesh is at the fifth position out of 161 countries in terms of employment generation renewable energy sector with creating 1,37,000 jobs in the sector.

The project will help more manpower generation in the renewable energy sector, the sector insiders said.

The ministry of land has allowed leasing out of the land for 30 years period to implement the project with assurance to return the land by North West Power Generation Company Ltd (NWPGCL) on the requirement of the Bridge authorities.

The government has targeted to reach the generation at least 10 percent in coming years, he informed to the meeting.

He proposed for allowing the land for 30 years period to make the investment viable.

At the beginning of the meeting, Land ministry deputy secretary Md Asaduzzaman said the state-owned North West Power Generation Company Ltd (NWPGCL) has sought 214 acres of land to implement the power project on January, 2020.  The proposal said the proposed plant will bypass the eco-park and land allocated for railway on bank of the Jamuna River.

The NWPGCL has a capacity to generate 2500MW of electricity, NWPGCL CEO Engr. A. M. Khurshedul Alam told the Daily Dun. He said the generation capacity will reach to 3,000MW in October, 2020 after commissioning of the Pyara unit-2.

He said the have already got approval from land ministry but they would require approval of the Bridge Division as well to set up the plant. The government has already signed power purchase agreements (PPAs) with 12 renewable power projects having the combined capacity to generate 715MW of renewable power and to produce at least 10 per cent of electricity from renewable sources by 2020.

Of them, only two power projects have started electricity generation. The remaining nine renewable energy projects are yet to make any significant progress. Only the 50MW Solar Park project at Mymensing is expected to start commissioning within the timeframe.

Another three power projects including the 32MW (AC) Solar Park at Sunamganj, 50MW Solar Park in Mymensing and 5MW each Solar Parks at Lalmonirhar and Sylhet have sought time extension due to COVID-19 crisis. According to sources, the government has signed the PPAs with most of the power sponsors without verification of their land or evacuation capacity.

The electricity generation capacity from renewable sources in Bangladesh is 631 megawatts (MW), which is only 3.10 per cent of the total generation of around 22,000MW.