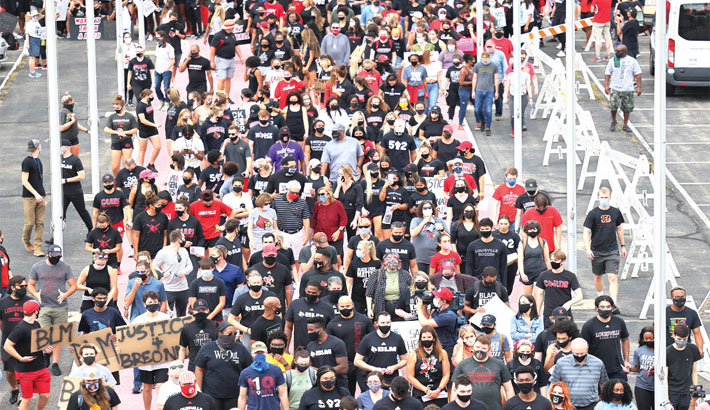 People participate in a march lead by the University of Louisville’s Men’s basketball team calling for justice for Breonna Taylor on Friday in Louisville, Kentucky. —AFP PHOTO

LOUISVILLE: The family of Breonna Taylor on Friday demanded US authorities release grand jury transcripts to show why no police will face direct criminal charges over her death, which has galvanized police brutality protesters, reports AFP.

Taylor, a 26-year-old black emergency room technician, was shot dead in Louisville, the largest city in Kentucky, on March 13 after three plainclothes policemen executing a search warrant burst into her apartment in the middle of the night.

Her boyfriend exchanged fire with the officers, who he said he thought were intruders.

The family’s lawyer Ben Crump led chants of “release the transcripts” at a press conference in Louisville, calling for them to be loud enough for Taylor to “hear it from heaven.”