School ground under water for over nine months in Bogura 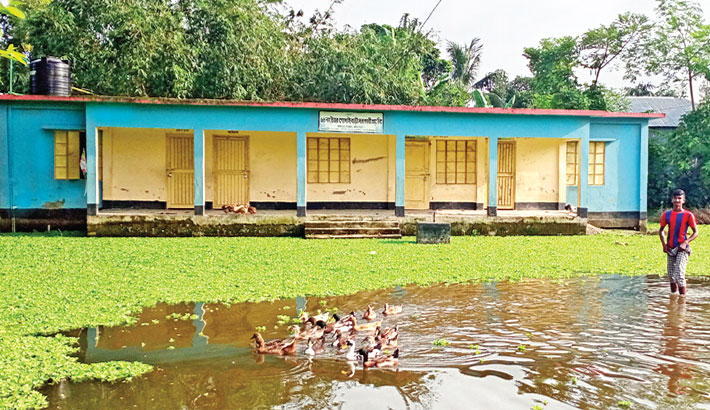 BOGURA: The playground of Uttar Gosaibari Government Primary School (UGGPS) under Sonatala Upazila of Bogura has become breeding ground of mosquitoes and insects as rainwater has been stagnant there for about nine months.

As a result, the playground of the school is in an unhealthy condition and the students of that school suffer from water borne diseases like diarrhoea and Typhoid for most of the year. Even, the hundreds of students of the school are being deprived of sports including assembly.

The Gosaibari Primary School was established in 1974 with the efforts of local educationist Sarwar Jahan Tuku and other dignitaries of the area. Later, the school was nationalised in 2016 during the rule of the present Awami League government. Although the march started with a handful of students at first, the number of students continued to increase every year as 100 per cent students passed the final examination and the quality of education increased.

According to the locals, the students have to be deprived of sports as there are bushes around the school and water in the playground. As well as the surrounding environment health is not conducive to education.

Most of the students of the school said that they had to go to the classroom through the water due to the accumulation of water in the playground and their hands and feet got itchy and they got skin diseases.

Eighty-five percent of the people in the area are directly involved in agriculture. They have to survive by fighting with nature. So it goes without saying that parents are not interested in their children education.

Md Rafiqul Islam Hannu, president of the school managing committee, said the students were being deprived of entertainment as water was frozen in the playground for most of the year and they were suffering from water-borne diseases.

The headmistress of the school Farida Yasmin said the concerned authorities have been informed to fill the soil in the school playground.