Returnees in a pickle over flying back 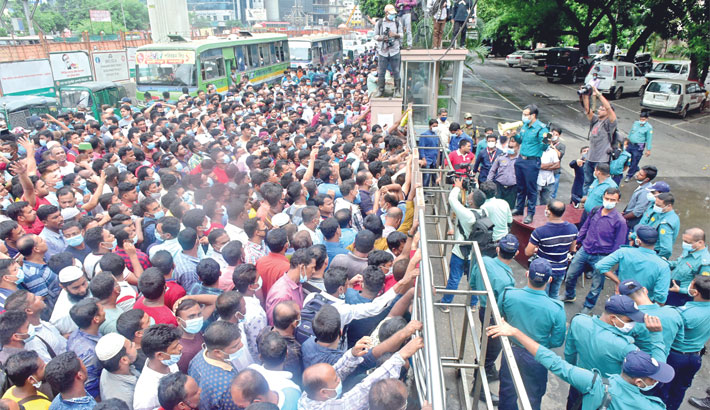 Blocking the busy Kazi Nazrul Islam Avenue, hundreds of people intending to go back to Saudi Arabia stage a demonstration in the capital’s Karwan Bazar area on Tuesday demanding tickets to return to their workplaces. —SUN photo

Several hundred people, who returned home from the Kingdom of Saudi Arabia amid the coronavirus pandemic, staged a demonstration again by blocking Karwan Bazar intersection in the capital on Tuesday, as they did not get tickets to return to their workplaces in the KSA.

Like the previous day, a huge number of people gathered in front of the office of Saudi Arabian Airlines at Pan Pacific Sonargaon Dhaka on Tuesday morning.

At one stage, they blocked the busy thoroughfare around 9:30 am causing severe traffic congestion for an hour.

Many workers claimed that they need to return to Saudi Arabia on an immediate basis, as their visas or work permits will expire in September or October.

Shariful Islam, who took part in the protest, said, “I bought a return ticket of Saudi Airlines, but could not go back as flights were suspended due to Covid-19. Now I am not getting tickets on time.” Hatirjheel Police Station Officer-in-charge (OC) Abdur Rashid said a number of law enforcers were deployed in the area. The situation was brought under control within an hour.

Earlier on Monday, the workers blocked the same road for around half an hour starting from 3:30 pm.

In March, the KSA suspended international flights in order to check the spread of the novel coronavirus.

On September 15, Saudi Arabia announced that it would partially lift its suspension on international flights to allow exceptional categories of citizens and residents to travel.

On Monday, Biman Bangladesh Airlines said Saudi Arabia finally gave a green light to the airlines to operate flights to and from the country from October 1.

In a statement, Biman Bangladesh Airlines Managing Director and Chief Executive Officer Md Mokabbir Hossain said landing permission is required before the beginning of seat allocation, but the KSA is yet to approve it.

As a result, now it is not possible to announce the flight and allocate seats for passengers.

The flight will be announced as soon as the landing permission is received and all concerned, including passengers, will be informed about it, he said. The ticket-seekers are advised not to crowd unnecessarily at the counter before the flight is announced, he added.