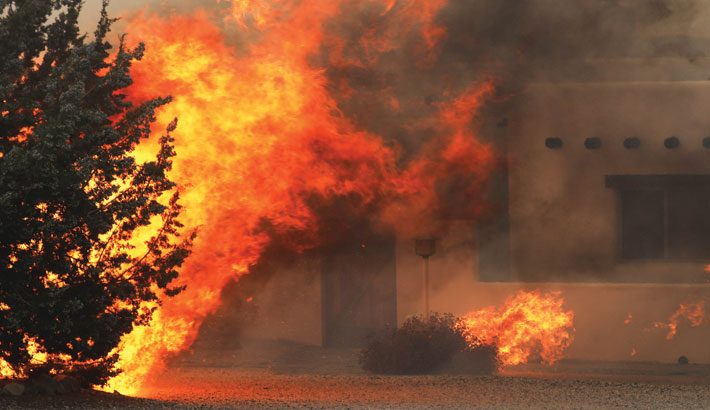 A tree burns in front of a home during the Bobcat Fire on Friday in Juniper Hills, California. Numerous homes were destroyed in the area a day after mandatory evacuations there as the Bobcat Fire has now scorched more than 60,000 acres. – AFP PHOTO

VANCOUVER: Smoke from California and Oregon wildfires has cloaked Canada’s third-largest city of Vancouver—known for its majestic mountain views and fresh ocean breezes—in the dirtiest air in the world this week, reports AFP.

Days have been spent smarting under a thick haze that has irritated eyes and throats, and sent asthmatics gasping for breath. It has also complicated Covid-19 testing.

On Friday, despite forecasted smoke-clearing rain storms, the city -- 800 miles (1,300 kilometers) north of the biggest California fires—topped for the second time this week the World Air Quality Index for worst air, after briefly ceding first place to Portland in fire-stricken Oregon.

“I’m out of breath all the time, my chest feels like it’s exploding, I feel like I’m going to suffocate,” Fatima Jaffer, a doctoral student at the University of British Columbia, told AFP.

“I’m afraid of the long-term damage this smoke might do to my lungs and my asthma.”

Jaffer, 58, said her worsening asthma added to a sense of panic and dread, as she had just recovered from Covid-19, which robbed her of her sense of smell. Now she worries the smog could increase her odds of reinfection or cause new health complications.

“I’d just gotten to the place of getting over the fear of Covid-19 and felt like I could breathe again,” she said, “and now I literally can’t.”

It’s been an “entire horrible week for air quality,” said Armel Castellan, a federal warning preparedness meteorologist. “The fine particulate has brought our Air Quality Health Index up off the charts.”

“There’s no doubt this is very massive and very concerning,” he said.

The same people are at most risk of smoke inhalation and the coronavirus, according to provincial health officer Bonnie Henry. The past month has seen British Columbia’s active Covid-19 cases surge 130 percent, hitting highs more than double those at the pandemic’s April peak.

Another vulnerable group are Vancouver’s more than 2,000 homeless residents, many of whom have chronic illness, a recent survey found.

“If you’re outside and homeless, and surrounded by this smoke and the pandemic, you can’t get away from any of these things,” said Jeremy Hunka, with Union Gospel Mission. “It’s hitting a group of people that generally have been just left far more vulnerable.”

For North Vancouver professional dog-walker Barry Appal, 64, he and his wife ten years his senior have had to wear masks outdoors and avoid usual strenuous trails.

“After a half-hour you could feel it in your lungs and get a headache,” he said. “We’re active and healthy, but with Covid-19 around, picking up any respiratory thing could become a bigger problem than normal.”

He’s most worried for his 30-something nephew with cystic fibrosis.

“He’s very susceptible to anything to do with his lungs,” Appal said. “He’s already freaked out about Covid—that could wipe him right out at the drop of a hat.”

Meteorologist Castellan said conditions should improve next week thanks to brewing Pacific storms clearing the air.

But with the “fingerprints of climate change” clearly visible in the year-after-year worsening wildfire seasons, “We’re not done with this yet,” he warned.