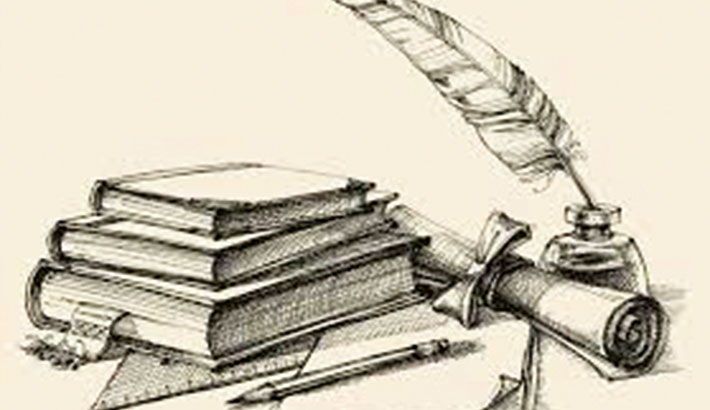 “I didn't have time to write a short letter, so I wrote a long one instead”-the humor that underlies this opening remark by Mark Twain is unmistakable. It effectively drives the point home that economy is a virtue of good writing. And that letter-writing can lend itself to the height of an art. A stimulating letter is, indeed, as good as an enjoyable literary piece. As such a finely written letter can be a prized possession capable of captivating its readers.

If you are tempted to savor a letter as a pure piece of literature, Ezra Pound’s ‘The River-Merchant’s Wife: Letter’ represents an apt specimen for you. Let’s take the last few memorable lines: You dragged your feet when you went out/ By the gate now, the moss is grown, the different mosses/ Too deep to clear them away!/ The leaves fall early this autumn, in wind,/ The paired butterflies are already yellow with august,/Over the grass in the Western garden;/ They hurt me./ I grow older,/ If you are coming down through the narrows of the river kiang,/Please let me know beforehand/And I will come out to meet you as far as Chou-fu-sa. The speaker of this poem is a sixteen-year old girl who was married to a young man at 14. The young man had gone to a far-away town for five months looking for a job. Pained by this separation she wrote this letter. Obviously there are touches of romance in it but it plainly averts all artificiality and exaggeration. Probably the girl doesn’t even know what poetry is all about. But its language is full of pathos and there is something of poetry in it that you usually do not come across in the pages of books.

It was inevitable that invasion of technology would lead to decline in letter-writing. But few probably foresaw that letter-writing would be abandoned practically altogether except for commercial purposes. There are no Lord Chesterfields, no Madame Sevignes, no Lady Wortley Montagues. But why think only of the distant past, George Orwell in the recent times was a great letter-writer. Kafka left behind a volume of letters available in splendid English translation. The letters of C. S. Lewis are delightful.

Letters can be amply illuminating. Take for example Abraham Lincon’s letter to his son’s teacher. It aptly sums up what real education should be like and how a teacher can really help a child grow. It teaches us, through a paradox, that there can be glory in failure and despair in success. A teacher should teach a learner how to laugh when one is sad but at the same time one must not fail to realise that there is no shame in tears. A learner must be made aware, the letter pleads, that a printed book is not the epitome of all knowledge and that he or she should follow nature as an open book. You will no doubt agree that you rarely come across pragmatic lessons such as the ones that this letter delivers.

Not that the west had a monopoly in letter-writing. In our part of the world we have had a few scholars, poets and eminent personalities whose letters have been published and have become a part of our literary heritage. Pandit Jawaharlal Nehru, Rabindranath Thakur, Pramatha Chowdhury, Sajanikanta Das, Michael Madhusudan Dutta etc. are only to name a few. Their letters serve not only as records of personal relationships, but also of things of general interest.

If you have cared to read Nehru’s letters to Indira you would recognise at once that the letters cover nearly every topic under the sun--- language, history, geography, politics, science, trade, plants, animals ---you name it. Here you meet a great mind sensitising another great one about the wonders of life and the mysteries beyond it. You cannot fail to notice the sheer inspiration injected by a father into the daughter when Nehru reminds Indira how as a child she was fascinated by the story of Joanne of Arc and how resolutely she wished to be someone like her! And none would perhaps dispute that Indira grew as big as her dream.

Letters are important in so far as they provide us with clues to the working of the minds of their writers. When we read the letters, for example, of a poet we come to know what he thought about poetry as an art, as a medium of expression of emotion and thought, of society, of politics and of other issues which ruffled the surface of his life and agitated his inner self. Tagore’s letters addressed to his niece Indira Devi Chowdhurani published under the title Chinnapatravali are not just letters but fine prose revealing a great expanse of the poet’s imaginative mind. You can easily feel, if you have a perceptive mind, the warmth of the poet’s heart that transmitted through his letters and how, in return, Indira’s replies soothed the forlorn heart of the poet at Shelaidah and Shahjadpur. If one wishes to figure out Tagore, the changes he had undergone as a person and an artist, then his letters map him the best.

Just take a quick look at Nazrul’s letters to Kazi Motahar Hossain. You get the picture of a bleeding heart, pierced by the arrows of unrequited love. His romantic advances were spurned by Miss Fazilatunnesa who happened to be the first Muslim graduate from Dhaka University and later a Professor of Mathematics at Bethun College, Calcutta. With an element of perturbation you find the rebel opening his wounded heart to his most intimate friend pretty much the same way as Achilles wept like a child at his mother’s knee after being insulted by Agamemnon. Her apparent lack of interest in Nazrul is believed to have worked the other direction fanning the poet’s infatuation for her immeasurably. You cannot but often feel puzzled by the mysterious chemistry that defines love. The poet’s unqualified surrender to feminine grace and yet failure to elicit any positive response lends credence to the ever illusive nature that embodies love.

Keats’ fate was no better, if his letter to Fanny is any indication. He was cut to the heart by Fanny’s indifference to his literary creation. The fashionable young lady pitied him more than she proved to be a true fan of his poetic genius. And no self-respecting man can stand prolonged state of being pitied.

Waiting for letters can at times be exasperating. This is more so when the correspondents belong to lands separated by many seas. You cannot, without being seriously disturbed, reconcile yourself to the fact that a great classical scholar, that Michael was, was about to be thrown into prison for not being able to pay his rent. Just imagine him impatiently counting every hour which seemed like infinity and visualising that a ‘powerful boat’ was carrying money for him from Vidyasagar to ease his distress. That is Michael’s part of the story which we come to know from his letters. On the other side, when some mischievous people would try to whisper into the pundit’s ear that Michael was wasting his money on wine abroad, he would lightly dismiss it saying that he would be more than happy to  pay for anyone’s wine who could produce an epic like Meghnadbodh Kavya.

In all likelihood you have heard about ‘Dear John’ letters. These two innocent sounding words can simply break a man’s heart. It’s a letter from a woman to a man, ending a romantic or sexual relationship because she has got another partner. It became a most talked about subject in the US army during the Vietnam War as such letters came in abundance to the US soldiers fighting at the enemy front badly battering their morale. But if you are a decent human being you should end the relation by causing as little hurt to your partner as possible. That requires you to beautifully sugarcoat your language to make the pain lighter. You cannot but be amused to see the opening line of one such letter that reads: “I hate to write …   … but I must let you know tonight that my love for you has died away like the grass upon the lawn…”

Letters used to be a staple of communication until about two decades ago. Those of us in our mid-forties fondly remember the elation that written words once radiated.  You can fondly hold a letter in your hand and travel back into the dim past of wonderful moments, feelings, emotions and responses. Those were the golden times when one would wait for days, even weeks, for a letter from someone he or she really cared. Once after prolonged wait it would reach your hand, you would pore over it, over and over again, and then slip it under the pillow to steal a few glances at it every now and then.

In the present text-crazy times the idea of sitting down and penning a really beautiful letter to an absent friend would likely be met with ridicule. If you feel nostalgic about a friend whom you haven’t seen for long or, for that matter, about someone who once stirred the delicate feelings of the innermost part of your heart, you simply pick up your mobile and give a piece of your mind. That’s it.

Letter-writing has practically ceased. Cell phones have stormed the scene. Today you can see people of all descriptions cupping their hands on their ears and talking interminably so that they do not feel the need of wasting ink and paper to communicate sentiments they can exchange by word of mouth.

Letter-writing sort of survives as an exercise for school children. School textbooks have chapters in letter writing, but they aim to teach children to write to headmasters for leave, to attend a grandmother’s death anniversary, or to invite a classmate to come to a sister’s wedding. Not one contains a real letter in which one opens her heart to some one of her own age frankly and freely-without fear of censure.

A good letter must not only be friendly but spontaneous. But alas! No one can force writers to take to letter-writing for form’s sake.